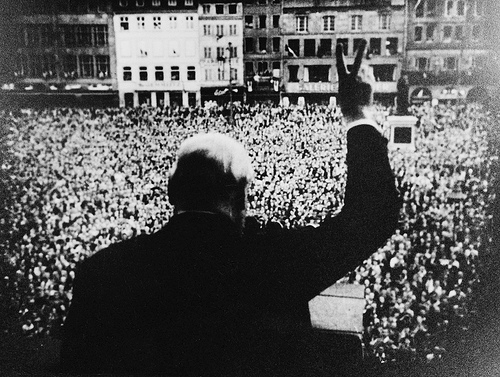 3 Mottos for Leaders to Gain Believers

In the previous article, I discussed the quality traits that make a leader a great recruiter.  But what good is theory without real world examples?

In order to get a true feel of what comprises a leader, it’s crucial to analyze those who came before us. Both their cultivated and natural leadership qualities led them to success in various situations. The concrete examples by proven leaders below act as guideposts for our ambitions toward becoming great leaders that attract remarkable people to join our journeys.

While leadership takes work and self-discipline, you’ll quickly realize that transforming yourself is well worth the effort.

“Education is what remains after one has forgotten what one has learned in school,” -Albert Einstein.

Einstein was born in Ulm, Germany on March 14, 1879.  Despite his name being synonymous with the word “genius,” Einstein’s academic track record was anything but impressive. His formal education began early at age 6.  While he could be described as an above average student, Einstein was quiet and often withdrawn from his peers.  At age 11, he left his school, the Luitpold Gymnasium in Munich. He became an autodidact, learning from books lent to him by family members.

Still, he was rejected from the Eidgenoessische Polyechnische Schule school in Zurich.  It would not be until 1901 when Einstein gained employment at a Bernese patent office did he begin extensive research into theoretical physics.

Regardless of getting a late start and untraditional path, Einstein would go on to develop the general theory of relativity, one of two pillars of modern physics. He would also go on to receive the 1921 Nobel Prize in Physics and would be paramount in helping the Allies deliver victory in WWII by encouraging President Franklin D. Roosevelt to begin research into making a nuclear bomb. Today, a conversation about genius can barely go 5 minutes without the word the “Einstein.”

“Continuous effort – not strength or intelligence – is the key to unlocking our potential,” -Winston Churchill.

Often regarded as one of the greatest wartime leaders in modern history, Churchill would overcome immense obstacles to eventually lead the British people to victory over Hitler’s Nazi Germany in World War II.

Churchill is best known for his demeanor during the Battle of Britain where Germany’s air force, the Luftwaffe relentlessly attacked British airfields, infrastructure and civilian populations during the summer of 1940.  Despite heavy losses and a pending German invasion, Churchill adamantly rejected any notions that the U.K. should negotiate with the Nazi forces. He knew who he was unwilling to work with and who he wanted to work with. Many nations joined the Allies.

During the London Blitz, Churchill instilled confidence amongst the British population by remaining in London during the heaviest bombing campaigns and often regularly visiting areas that were heavily damaged. When times are tough, resolve a long way.

3. Uncanny Ability to Energize Others.

“Outstanding leaders go out of their way to boost the self-esteem of their personnel. If people believe in themselves, it’s amazing what they can accomplish,” –Sam Walton, founder of WalMart.

Because Walton’s business model revolved around lower costs and uncanny customer service, it was imperative that build a highly motivated, passionate staff at each and every location.

To ensure a high level of commitment from all WalMart employees, Walton would treat all workers as if they were partners. In addition to implementing profit sharing plans and encouraging stock ownership, Walton would set high goals for even his low level employees, encouraging competition at all levels to keep score on the progress of each individual.

His philosophy that high achievements should be rewarded with high payoffs gave everyone throughout the company hope for a more fulfilling future. When things got stale, he would cross-pollinate, having managers switch jobs with one another to stay challenged.

These are just three examples of real-world reflection of leadership traits in people who turned themselves into genuine leaders in their respective fields.

Most of us won’t go on to be Einsteins or Churchills or Waltons, and there’s nothing wrong with that. Regardless, all of us can learn from the examples of these historic leaders, as well as the leaders in our own lives. Learning bits and pieces from each of their lives can help us become people who others want to follow and work with.

Look around at the people in your life and see where they’ve succeeded in leading others. It won’t be as groundbreaking as winning WWII or founding the most prolific store of our time, but you’ll find that those who consistently work on these leadership traits, succeed wherever they land. And the rest of us will be looking to land with these leaders.