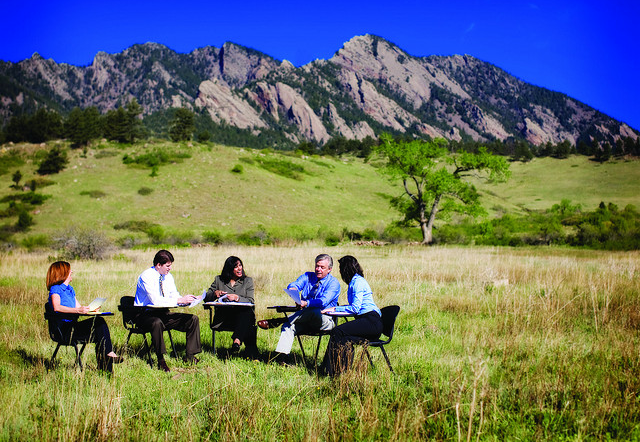 Happiness in the workplace is something of a double-edged sword. Yes, having happy employees is critical to the success of any company, but there are plenty of ways that bending over backwards to put a smile on your workers’ faces can backfire. As with everything else, balance is key.

Let’s start simple. As a boss, you’re neither able nor expected to be in charge of your employees’ happiness every second of every workday.

The thing about employee culture is that participation should never be compulsory. Yes, you should encourage employees to get together outside of regular business hours, but don’t force it. That kind of “extracurricular” contact could go a long way toward helping your team work more effectively together while they’re on the clock; encourage it, but don’t try to mandate it.

What any boss needs to understand is that the people he or she oversees have lives of their own, with individual hopes, desires, worries, sources of stress and, yes, plans for what they want to do after work. We are not our job descriptions, after all.

Onno Hamburer, the author of the Happiness at Work e-book, understands that negative feelings are a part of daily life: “…Even when things are going well, we sometimes need negative feelings, as they serve as a warning when there is a chance that things may go wrong. Negative emotions also help bring about change.”

Trying to create happiness is putting the cart before the horse. If you focus first and most intently on creating a welcoming environment with a high hiring bar, your happiness “problem” will probably take care of itself.

Being a boss obviously brings with it a host of challenges, and chief among them is the whole identity crisis thing.

What I mean is that there are a number of management styles available to you, and while you’ll probably find that some combination of them will get you the best results, there are still stereotypes that you’ll want to avoid.

One of these is the “good guy boss.” This is the boss who wants to be everybody’s best friend – who feels honor-bound to wear a smile, say yes all the time, and generally sacrifices objectivity for artifice.

I understand the appeal; everybody wants to be liked. And, yes, to a certain extent, being a likeable boss is pretty essential to morale. Just keep in mind that being liked and being effective are not always the same thing.

So what does the good guy boss look like? He’s the one who’s always smiling, even though it looks a little bit more pained than it used to. He’s the one who never says no to his employees, even when it will hurt the company.

Here’s the thing – being a good guy boss every second of the day could actually hurt you. Here’s how:

I’m not saying it’s impossible or inappropriate to be a positive, well-liked, and optimistic boss; the only danger comes from replacing things like objectivity and honesty with artifice. Your focus needs to be on creating an atmosphere of trust and mutual respect, rather than on being liked no matter what.

Myth #3: Happiness is not the same thing as engagement

Despite what Gallup might tell you, happiness is not the same thing as engagement, no matter how often we use them interchangeably.

I’m going to make a slightly ridiculous comparison, so bear with me. If you’ve ever owned a cat, you probably know that they go crazy for string. You can drag it around and they’ll run and jump to catch up with it. After a while, though, they’ll tire of the stimulation, lie down, and only halfheartedly reach for the string while they repose lazily on the carpet. The pursuit of the reward is no longer worth their time.

In this example, the cat is your workforce and the string is, well, whatever you want it to be. Taco Tuesdays? Free shots of Yukon Jack at 3PM every day? You might be temporarily improving their happiness with relentless boondoggles, but too much of a good thing and they’ll stop putting in the effort to catch the proverbial string. Simply put, they’ll be happy and probably complacent, but they won’t be engaged. And they certainly won’t do their best work.

For the record: the occasional Taco Tuesday is wonderful for morale. Just don’t overdo it.

If I can put my WebpageFX hat back on for a moment, I’ll point out that we’ve seen really wonderful results from providing unique experiences for our employees – usually once a month or so (September’s was a sushi-making class). They’re not a direct reward for good performance – not exactly. The difference is that employees understand that we’re looking out for their happiness, and they very naturally look for ways to feel that they’ve earned it.

And that, really, is the crux of everything you’ve just read: employee satisfaction is all about providing opportunities to pursue happiness. It doesn’t require false praise or facades. If you want more ideas for how to improve your own company’s happiness and engagement, I hope to explore our approach to employee incentives in further detail in a future article.

This article was written by William Craig from Forbes and was legally licensed through the NewsCred publisher network. Photo Credit Office Now. SmartRecruiters is your workspace to find and hire great people.