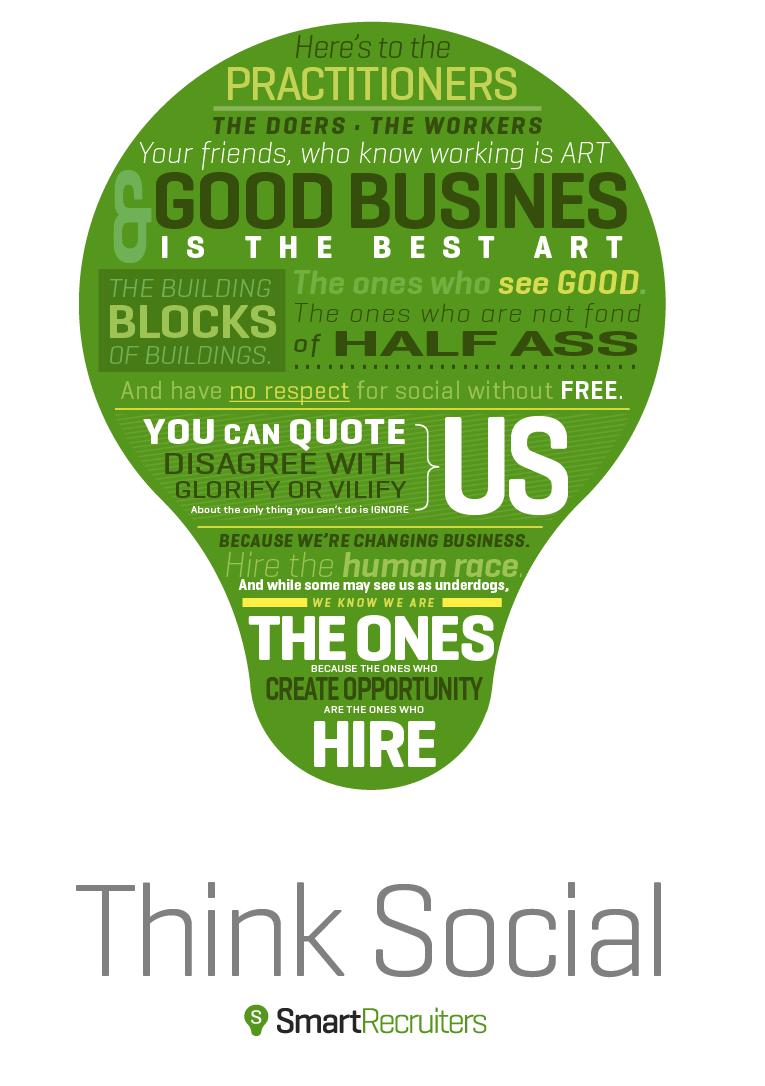 We believe hiring is a social activity. The act of creating a job ad worth sharing, marketing how great your company and open jobs are, communicating with qualified candidates and finally making a job offer are all inherently social activities. Recently we’ve seen the rise of social recruiting, relying on traditional methods alone is a quick way to ensure your job will not get the attention it deserves. Twitter allows for quick conversation, in 140 characters or less companies, CEOs, recruiters, hiring managers, whomever have a chance to engage an audience they would not have had access to previously. Here are the best examples of Twitter recruiting.

5. I mentioned earlier we believe hiring is social. So with that belief in mind we build a product that allows you to be a social recruiter in just one click. Because we really believe in a social hiring strategy don’t be surprised if one of us reaches out to you on Social Media, particularly if it’s a social media job. When we were looking to hire a Social Media Intern, an applicant reached out to, David Smooke Director of Social Media. And a discussion with Laura Hong began – before even entering the office, we knew her favorite literary and professional content – and she knew the content marketing style of SmartRecruiters.

Thanks for the follow @DavidSmooke of @SmartRecruiters. Looking forward to meeting you!

4. Massive enterprises usually get a bad reputation for not answering candidates, long job applications, and little to no talent attraction strategy. This tweet shows that even a company like Oracle is getting on the Social Media train. A tweet advertising jobs, and a picture? I have to say I’m impressed. Let this be a lesson to other Fortune companies, you can be cool.

3. Elon Musk is an innovator. Without any doubt he is changing the way of big business. Musk commits to transparency by updating his followers on the day to day of his business ventures. Not only does he keep us updated on what he’s doing, but also what positions he’s looking to hire. Musk advertises a chance to work as an engineer on the Tesla team. Not only that, they report directly to Musk himself. Now that’s a job ad that screams opportunity.

Engineers interested in working on autonomous driving, pls email autopilot@teslamotors.com. Team will report directly to me.

2.  Marc Jacobs is one of the most recognized fashion brands in the world. You don’t get there without being ahead of the curve. Marc Jacobs president, Robert Duffy was the official Tweeter for Marc Jacobs until he decided it was time to pass the torch. Applicants need only apply via Twitter. 140 characters to woo these fashion mavens into hiring you? The challenge was accepted by thousands.

Were looking for someone to come on and take a job heading our twitter acct and social media. Send something clever for a chance at the job!

1. Uber revolutionized ride sharing, it takes a great team to disrupt the status quo of transportation. Travis Kalanik CEO & Co-Founder of Uber, known as the rebel of Silicon Valley, took to Twitter to find a product manager slash business developer for his team. Ryan Graves answered him, and is now the Head of Operations at Uber. Now if that isn’t successful social recruiting, I really don’t know what is.

The new expectation is that the employer goes out of their way to engage the talent. And if you ask me, that’s exactly as it should be. Twitter levels the playing field, meaning companies of all sizes can take advantage of its reach to attract the talent they need for business. By diversifying your talent attraction and recruitment strategies you’re widening your talent pool – and only good things can come from that.