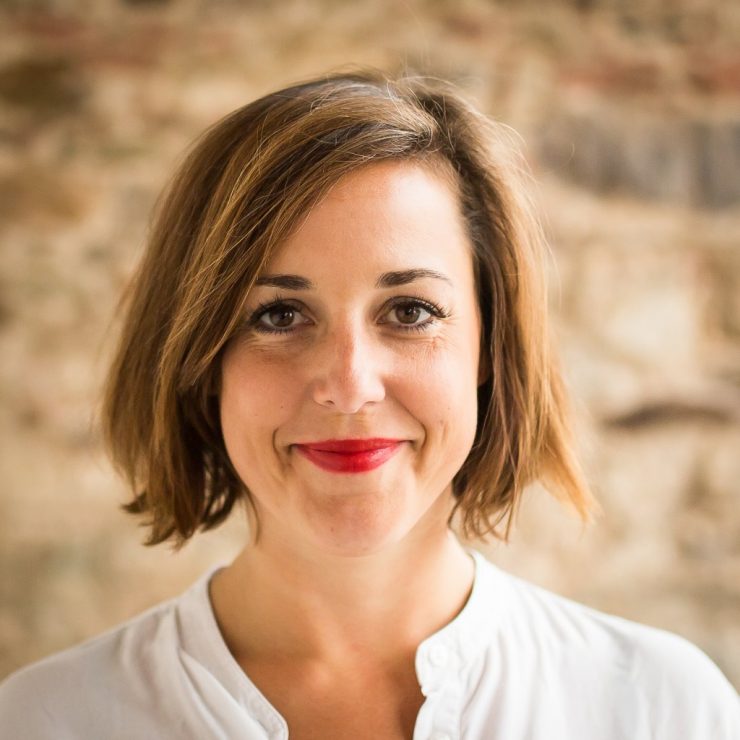 Anna Ott: Break Everything and then Say Sorry

Anna would be the worst HR director in the world. She said so herself. She wants to break your system, burn your CVs, and if you don’t like it you can talk to the chatbot because she’s not asking permission.

In an industry known for its meekness, Anna has made a name for herself by being anything but.

A 17-year recruiting veteran, she’s found her niche at hub:raum, a startup incubator for Deutsche Telekom, helping fledgeling companies experiment with HR Technology. And who wouldn’t want to be her guinea pig? Anna has a way of getting people excited. If she had a superpower she would be Momentum Woman (™ pending). She doesn’t ask, she does.

And she has a name for time-wasting office bureaucracy: the beast. She doesn’t feed the beast. She fights the beast. One day she decided there would be no more CVs at hub:raum and that was that. No more CVs.

In her spare time, Anna runs a secret society. The “Secret HR Society”. An invite-only club where HR heads can talk shop and swap stories of horror and success.

That’s the other thing about Anna, she wants people to be heard. The little things that waste your time at work? The ones your friends are sick of hearing you complain about? These are the ones Anna wants to help you fix.

Where are you speaking to us from today?

I’m in London for a job boards conference. I haven’t seen anything yet, you know I go to all these beautiful places and never get to see anything. This time I decided to stay the whole weekend so I can really explore.

Job board conference sounds interesting, what will you be doing there?

I’m here to speak at the European Job Board Summit. It’s a charged atmosphere because these legacy systems are here to figure out how to survive. They are at the point of realizing that throwing money at job postings is not a longterm solution. HR needs to embrace new technologies in order to have a future. That’s where I come in, I tell this room full of old men about the technologies I’ve tested and the things I’ve learned and hopefully pull them into the 21st century.

Give us a teaser. What kinds of technology are you going to hit them with?

Chatbots! Everyone knows I love them and they really are a game changer. Over the past year, we tested a chatbot that runs through Facebook messenger with extremely positive results. The chatbot acts as a job board and initial application. A candidate can ask if there is an opening in a certain region. Let’s say there’s not, then when a position does become available the chatbot will initiate a conversation. If the candidate finds a job they are interested in they can ask questions like ‘can I bring my dog to work?’ or ‘do you provide lunch?’ Things that wouldn’t be in a job description but maybe you’d like to know. It’s such a time saver and candidates like it too.

What have you learned about chatbots in the past year?

I got a great deal of insight into candidate behavior. Salary. That’s the number one thing people type into chatbots. No ‘hi’, no ‘how are you’. When people know it’s a bot they cut the niceties and get to the point. It’s a safe space because it’s anonymous. Usually, the hiring manager controls the information flow but when you use a chatbot candidates have more agency which I think is good.

It’s Sunday night and your average passive candidate is chilling, watching Game of Thrones, just scrolling through job ads to see what’s out there. They scroll to an intriguing post but they have to know it’s going to be worth the trouble of applying. We’re talking compensation. Salary isn’t something we usually disclose on a job ad but it is something a chatbot could tell an interested party to turn them into a very interested party.

Best career advice you could give?

Ask for forgiveness, not permission. HR people should be more disobedient. If your company would truly fire you for being innovative then you know what I think of your company. Stop feeding the monster by giving into the bureaucracy and red tape. Be bold, be blunt, just do it and apologize later.

HR wasn’t the sexiest profession when I started. People would be like ‘ aw you weren’t smart enough for marketing’. Technology has changed that perception little by little. We need to spearhead the tech advances that change the way we do our jobs instead of just execute them. Tech innovation is what keeps HR relevant so we need to be on the frontline.

Give us an example.

One day I just stopped using CVs. I didn’t ask anyone or write a memo, I just stopped. There’s no real connection between the probability of your success and what’s written on your CV. Is school what got you where you are today? Great! Or was messing around on the computer? Also fine. I don’t care I just want to know how you are going to find solutions in this role.

We tried anything but CVs – video interviews, test questions, chatbots, you name it. And it worked. We hired great people. Now I can go to our parent company Deutsche Telekom and show them the positive results from getting rid of CVs at hub:raum and maybe they can start to adopt the practice. Corporations take longer to adopt new practices but one day we could live in a world where you don’t ever have to read or compile another CV. That’s the dream.

I just tried something innovative without permission, I learned something, and I didn’t get fired. Come to think of it, I probably wasn’t radical enough given how smoothly it went. Next time, I’m really going to break something.

You are a total HR head. Does that mean you’re a people person?

I don’t think HR people are generally ‘people people’ they’re more ‘people collectors’, and that’s what I do. If someone new comes to the coworking space I’m at I have to go over and say hi and learn about them and add them to my ‘pile of people’. then I keep them in my mind to connect with other people because that’s what I like to do.

How’d you find yourself in HR?

Getting kicked out of kindergarten meant that I finished school a year early. I guess I liked to break things even back then. My idea was to go corporate in my gap year so I could save money to travel abroad. I landed a spot in HR. It was terrible, but I made great connections and got involved with startups which was crazy cool back then and still fascinates me today. I’m a geeky, techy person. I’m lucky I found my niche.

What I see a lot are companies trying to pass off machine learning as AI. I saw it at HR Tech World Amsterdam and I don’t like it. The thought of a less savvy HR rep buying into it makes me sad so I hope people stop trying to pretend their technology is something that it’s not.

Often in hiring, we think of finding the perfect stranger when really you should focus the potential you’ve already aggregated. Think about growing the employees you already have or encouraging former interns to return. It’s so much easier to hire for a junior job so it makes sense to hire into junior positions and cultivate them into senior roles over time.

Spraying job ads everywhere is ineffective. Most job descriptions are just crap. They don’t actually describe the job and often times they contain a lot of unintentional bias.

Tell us about your event ‘Tru Berlin’?

Tru Events are the kind of thing you get addicted to. It’s hard to explain to someone who hasn’t gone why they need to go. The only way I can describe it is to say you get all the inspiration from one day at a Tru Event to keep you going in your day-to-day job.

There’s no hierarchy. No, ‘you’re in the crowd and someone important is on stage with a Powerpoint’. No Powerpoint allowed. You go there and discuss your projects and share ideas in a way reminiscent of networking, but much more organic than your typical mixer.

It’s Berlin so there will be beer and pizza. We’ve already sold 50 of 70 tickets so far. The price is by donation and we were delighted to see the average donation to be around €10 which I think speaks to how much an event like this is needed.

Who is the most valuable person in your network?

Bill Boorman, founder of Tru Events, and total non-conformist. I would say half my work every year outside hub:raum comes from him. You look at this tattered guy and you wouldn’t know it but there’s a genius under there. Part of the reason I wanted to host Tru Berlin was to welcome him to the Berlin scene and you can definitely look forward to a Santa appearance… I have to remember to pick up that suit when I get back.

If you could have a robot take over one part of your job what would it be?

I’m happy because I already have a chatbot that handles all the stupid questions from candidates. If I could be spoiled I’d want a video-bot that could take basic footage, turn it into a job description and disseminate it to the world. That would be cool.