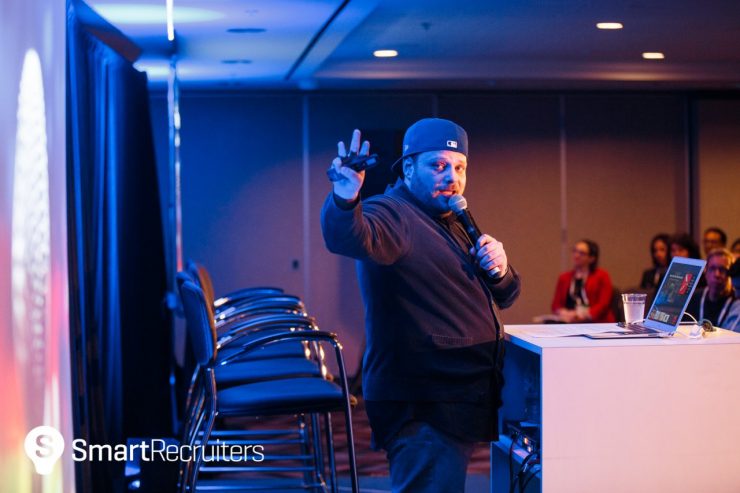 Be Better than Lazy: A Study in Recruiter Brand, with your host, Matt Charney

Who better to ask about recruiting brand than the man who prides himself on being everywhere in the world that Talent Acquisition gathers? (Note: four conferences in the last month alone.)

If you’re a recruiter and you hear Big Pimpin’ come on the radio, you may think of Matt Charney. Not for any illicit activity or “spendin’ cheese”, but for his particular penchant for Jay-Z themed powerpoints that accompany most his conference presentations and his undisputed honorific of “recruiting influencer”. Which is, indeed, both big and pimpin’.

We know Charney as the Chief Content Officer at Allegis Global Solutions, as well as Executive Editor at Recruiting Daily, but most of all, in an industry not always associated with saleable personality, he’s a proper brand – thousands of people in the HR space look to Charney for competent – at times, satirical – analysis of all things TA.

The influencer status isn’t just about his 24K+ Twitter followers. Twitter followers can be bought. His rep is thanks to years of experience building a tangible knowledge base, a real network, with real people, who trust you. Whether working for Disney, Warner Bros or Cornerstone, he built his brand on the simple but effective tool of “not being a dick”. No number of Tweet-Ks will get you that.

And today, he’s here to talk to us about how you can create your own great recruiter brand. But be warned, there are no shortcuts, no pay-offs, and there definitely ain’t no frontin’.

Tell us what ‘employer brand’ is.

An employer brand is set to create a highly polished image. There may be some tactical transparency, but very little. I think that what a good recruiter does, is take that image, and balance it out with some of the less filtered, honest, truth. The more you can tactfully walk back your employer brand to candidates, the more you are building a reputation of credibility.

Building ‘recruiter brand’ – is it that hard?

So here’s what I think it is: it’s simply being better than the people that are lazy.

Recruiters are extremely lazy, they try to automate everything and then even when everything’s automated then they spend a lot of time arguing the pedantics. Differentiate yourself by actually picking up the phone, being honest’ and knowing your industry.

That’s how you build a recruiter brand – by not being the guy who’s sending out emails all day.

How do you keep the two separate?

Don’t put too much emphasis on employer brand!

I worked for one little business called the Walt Disney Company, and everyone was like ‘oh my god, it must be so great to work at Disney.’ I had to recruit people for the office of the CFO, so we’re talking controllers, finance people, corporate strategists. And everyone in ‘the industry’ knew that Disney was not a great place to work, for money or for work-life balance… We paid 50 percent under market.

What then was the biggest mistake you made in building your recruiter brand?

Don’t think in terms of ‘how do I get Twitter followers?’ – these things don’t really have an impact.

For all these stupid influencer lists I make it onto, I think a free Mcdonalds hamburger via Clout might have been the best reward I’ve ever gotten. Focus on the relationships that matter, which are the people in your company.

How do you build/maintain a recruiter brand at a company that doesn’t care about hiring?

Almost every CEO says that one of their strategic imperatives is hiring, but they probably care more about shareholder value, and, if they’re a publicly traded company, that’s the way it should be.

If you work with a CEO who doesn’t care about hiring, then you need to make it clear that the organization cares about the people. Because if the C-suite doesn’t look at human capital as a success metric, then you’ll never be able to change that.

When I worked at a company where the CEO didn’t particularly care about hiring, I could have gotten him on video to tell me how great the careers there were and how much he appreciates employees, but frankly, that was a lie, and frankly, he’s terrible on camera.

So instead I sought out other people with high hiring volume and really built relationships with them which in any organization takes some time – especially now that people don’t smoke. That’s where the real information flow happened.