Should innovation drive business? Every great high performance work organization wants to be innovative. For talent selection, technology, and strategic initiatives, it is extremely important to stay current in the world of business today. Innovation is power; the power to compete on a broader scale but sometimes companies harnesses the power of innovation inappropriately. For instance, have you ever worked someplace that boasts the latest software and gadgets because that’s what top talent or organizational restructuring needs?  Once upon a time, two times actually, I’ve worked for companies with flawed business development strategies, and those flaws filtered into recruiting and productivity.

One company had a standard practice, whenever they hired a new management level employee, they would automatically give them a laptop and cell phone. No one even discussed if it was necessary for these employees to have the equipment. What should have happened was a job analysis, researching the essential job functions of each position regardless of title to determine if that employee needed the phone or laptop to perform their essential duties.

It became more of a status symbol then a necessity.  So much so that even when employees would move up via a promotion they felt entitled to a cellphone and laptop. The company had all these managers and executives with company paid devices. Here’s what happened, there was a site emergency, a fire, an after hours fire at that. The fire department was notified, managers, directors and VP’s were called. Just about anyone with a company cellphone was called, and guess how many actually answered? Two out of about 20. No one was available via the laptops or cellphones. After that incident a billing analysis was performed and then someone finally wondered aloud in a management meeting, “How much are our cellular bills? Why are we paying so much for our phone service if we can’t reach anyone when we need them?” Genius.

Needless to say, that was the end of the free cellphone and laptop perk unless deemed a business need.

Such as this R2D2 garage: 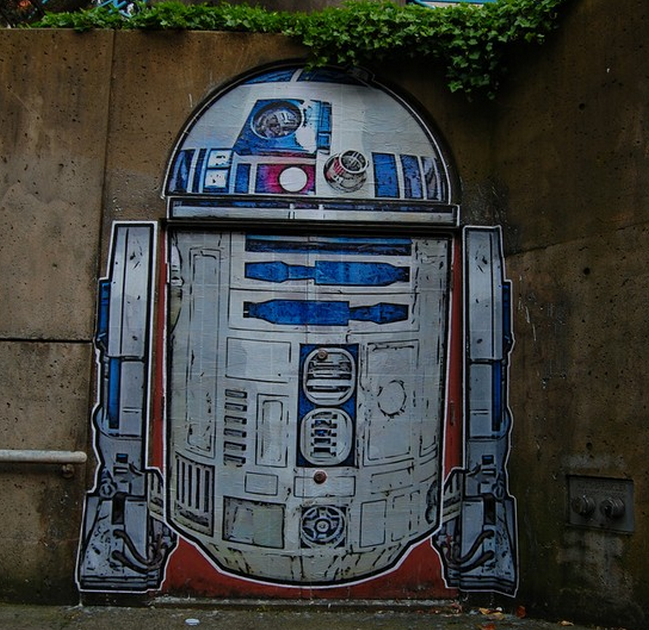 But seriously, here’s another failure in technology and business acumen: there was this call center, and the executives were not happy with the service and production of the call center analyst. The execs decided to purchase screen capture software called NICE. NICE could be programmed to record thousands of calls per day and it would cost a couple of million dollars to implement.

This call center did not have the most efficient system for customer service, logging and tracking conversations, billing, trouble shooting and order placements. In fact they a different system for each of them. That does not include email and internet, at any one time an analyst would have 7-8 different systems open.

Regardless they went ahead and purchased NICE. This program was a monster, it had to be loaded on the servers and the workstations, and it utilized a huge about amount of space and speed.  We noticed that overall network performance suffered after the NICE program was installed. Seriously, every 10-15 minutes there was congestion and freezes. Another problem with the NICE was storage; initially the executives requested the system to record all analysts at all times. We were getting 30k call a week. Who’s going to look and listen to all those call for quality assurance and training purposes? Oh yeah you guessed it, this guy right here. It was horrible.

Ultimately the NICE system was shut-down because it caused too many network issues and it had recorded more data then was necessary.

The Lesson: business technology is not judged based on how fancy it is, it is judged by how it helps the end user’s productivity.

In business technology, there is a fine line between innovation and wasteful. In our first example the company bought new technology because it was trendy. In the second example, the company needed new technology, but they purchased the wrong type of technology. They bought something that caused delays and outages, thus reducing employee productivity. The employees would have been more efficient had they invested in a technology that caters to what employees need. My company needed technology that combined the separate billing, troubleshooting, tracking, and order placement systems into one system.

Organizations should use systems that not only make business sense, but also are cost effective, and easy to use. Employees will not use a system that is too cumbersome and/or not practical. New employees don’t want to learn complicated systems. Remember this, choose the technology that serves your organization to empower the employees, the product, and the customer experience.

About the Author: Chris Fields is an HR professional and leadership guy who blogs and dispenses great (not just good) advice at Cost of Work.  Connect with Chris on Twitter. Photo Credit WhattheHellz