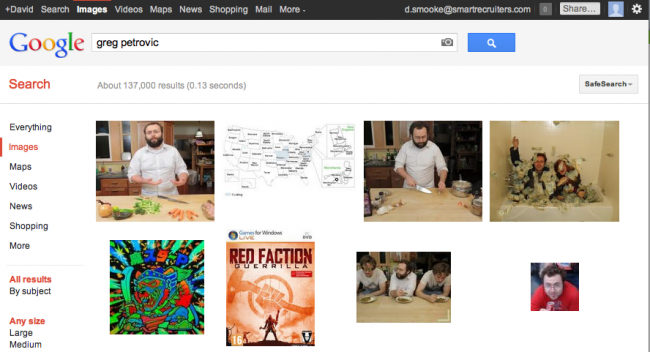 In my experience, it’s pretty rare to leave a job interview feeling like a briefcase filled with one million dollars in cash, with each bundle held together by a band of silk, and the bills so fresh that the whole thing smells like ozone; like everything is fine, like I am a good human being and that, even if I don’t get the job, the world will still be fundamentally okay.

Usually I feel a mixture of relief, worry and paranoia:

Were my answers okay?

Did I talk enough?

Was it my shirt?

Did I mess up shaving?

Were my eyes crossed the entire time and I somehow didn’t notice it, even as they began to bug out of my skull further and further?

Why am I second-guessing myself?

What did they even want from me?

What did I do wrong and how can I make it never happen again?

I recently had a million-bucks interview, though, and the funny thing about it was why it was so good: they Google-stalked me. They flat-out, no-holds-barred typed my name into Google and looked at what kinds of things my real name was attached to on the Internet; the Facebook, the Myspace, the blog (where I occasionally write about video games), the cooking show, the short stories, the book. And yet… they liked what they found. They liked what they found so much that they really couldn’t stop talking about it, and the whole interview ended up consisting of me sitting there while they alternated between telling me about their company, asking me about what they found on the internet. Intermixed were a few of the standard interview questions about how I would handle angry clients, or how long I saw myself working there. But central to the whole interaction was that they’d taken the time to get to know me, even if just a little bit, and that made the whole thing less… awful. Less of a stilted roleplay and more about earnestly seeing if they and I were a good employment match.

Granted, the risks here are obvious. I’m sure that for every business that checks me out, ten are nonplussed and move on. But the 11th, the one that likes me for me and wants me to be on their team? That’s the one I’d want to work for, anyway. Greg Petrovic is a person. He co-wrote Fredward Bound, an annotated parody/complete remastering of Twilight, is the former Editor in Chief of the Bulldog Weekly, and thinks interviews should involve a candy bowl.

When you can do something to make your interviews have more relevance, you have to at least consider it. Put your job openings in the right place with SmartRecruiters

Greg Petrovic is a person. He co-wrote Fredward Bound, an annotated parody/complete remastering of Twilight, is the former Editor in Chief of the Bulldog Weekly, and thinks interviews should involve a candy bowl.