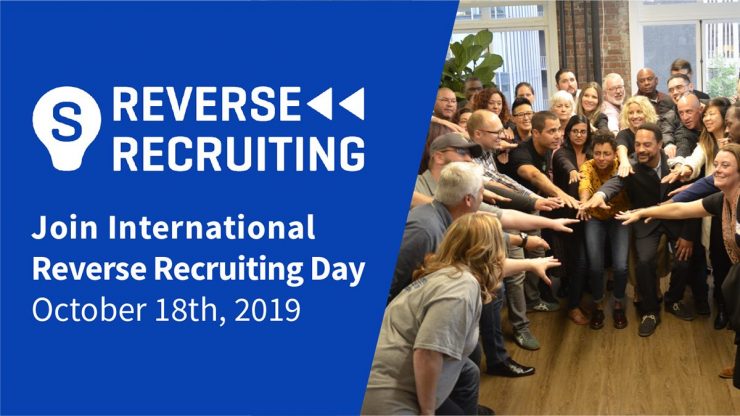 Corporate Social Responsibility: The Rise of Reverse Recruiting in 2019

Recruiting is usually defined as the act of attracting and selecting candidates for employment within an organization. Thanks to SmartRecruiters’ Reverse Recruiting initiative, that definition is taking on new dimensions.

On the careers section of our website, we state the following: “At SmartRecruiters, we are on a mission to connect people to jobs at scale.” To do so, we built a cutting-edge recruiting platform and devised an innovative hiring methodology. As a result, we’ve made it easier for candidates to apply for jobs and for companies to hire the talent they need to succeed.

However, we realized that in order to truly enact our mission statement at scale, we’d have to come up with a more inclusive strategy. One that could help job seekers who have traditionally been successful, as well as those who have encountered setbacks.

The truth is, there are only so many jobs to go around. And for every applicant that’s successfully hired, countless others are turned away; their hopes of finding work thwarted by some variation of the following boilerplate rejection notice:

“Thank you for taking the time to meet with our team about the position. It was a pleasure to learn more about your skills and accomplishments. Unfortunately, our team did not select you for further consideration. We wish you all the best with your professional endeavors.”

For some candidates, these messages are menacing, albeit minor setbacks on the path to employment. For others, they’re representative of the entire job search: an experience marked by endless disappointment. Over time, these candidates are at risk of becoming what the Bureau of Labor Statistics (BLS) refers to as discouraged workers.

Discouraged workers are defined as those who want and are able to work, but have stopped looking because they “believed that no jobs were available for them or there were none for which they would qualify.” As of July 2019, there were an estimated 368,000.

Obviously, having to turn away job applicants is a reality of business. The laws of supply and demand dictate it. That doesn’t mean, however, that companies are incapable of helping candidates that have been overlooked. Point in case: SmartRecruiters.

Reverse Recruiting: Connecting Even More People to Jobs at Scale

In February of 2019, SmartRecruiters’ CEO Jerome Ternynck introduced Reverse Recruiting, the company’s largest Corporate Social Responsibility (CSR) endeavor to date. The initiative was put into place to offer assistance to candidates, like discouraged workers, who have had difficulty finding work. Among them are immigrants, veterans, formerly incarcerated individuals, parents and caregivers returning to work and seniors.

Pilot sessions were held in the spring of 2019 in San Francisco, Paris, Berlin, Spokane and Krakow, and the results were overwhelmingly positive. To keep the momentum going, the first ever International Reverse Recruiting day will be held on October 18th, 2019. SmartRecruiters offices across the world, in partnership with local nonprofits and corporate sponsors, will host events to assist job seekers by conducting mock interviews, reviewing resumes, and providing networking opportunities.

For instance, SmartRecruiters headquarters in San Francisco is hosting a Meetup event in tandem with Disability Solutions, “a national, non-profit consulting practice working with corporate leaders to leverage the engagement of talented job seekers with disabilities.”

We would encourage individuals or companies interested in hosting a Reverse Recruiting event of their own to make a pledge.

The negative consequences of long-term unemployment extend far beyond finances. According to a report from Gallup, depression disproportionately affects those who have been jobless for six or more months. Key findings from the study include:

These sobering figures underscore the importance of SmartRecruiters mission to connect people to jobs at scale. Access to employment isn’t a luxury or a reward, but a necessity for the well-being of society as a whole. As the late Senator Paul Wellstone often said, “We all do better when we all do better.”

If you haven’t yet signed up for International Reverse Recruiting Day on October 18th, please do so here.