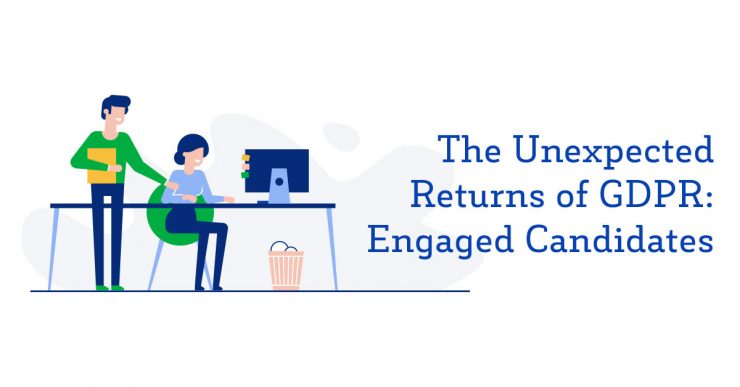 Despite the Recent Google Fine, GDPR is Proving to Be Helpful for One Particular Group: Recruiters

News of Google’s 50 million euro fine has rocked the business world, but as other multinationals panic, recruiters can rejoice in some of the unexpected benefits of the GDPR regulation.

On January 21st, 2019, The French Data Protection Authority announced from Paris it would be slapping Google with a 50 million euro fine or around 57 million dollars for not correctly disclosing to its users how their data would be collected and managed by its search engine and services such as Youtube, and google maps to present personalized advertisements.

As one regulator put it “Google’s practices obscured how its services can reveal important parts of their user’s private life since they are based on a huge amount of data, a wide variety of services and almost unlimited possible combinations.”

This comes as the fourth and the largest fine brought against a company breaching the new General Data Protection Regulation (enacted in May 2018) and sends a message to the rest of the business world that no corporation is too big to avoid penalties. Google is determining whether to appeal the fine, but faces an uphill battle as history has shown through multiple billion dollar fines that the European Union does not favor the tech giant.

We, at SmartRecruiters, have been following the development of these measures since they were announced, bringing attention to the fact that many people didn’t know if their Applicant Tracking System (ATS) was up-to-date. (Evaluate your ATS here!) We also covered the Cambridge Analytica scandal, detailing how the business community is reacting to the changes that need to be made in order to stay GDPR compliant.

Now that we are in 2019 and the world has not imploded over these new regulations, Smartrecruiters has some new information that demonstrates that GDPR has actually had some positive effects, specifically in the world of recruiting. I know, crazy to think that bureaucracy had any benefits… but hear us out, and check out this infographic below describing them.

Based on this infographic we can see that one of the natural consequences of making the hiring process and data collection of applicants more transparent, are more engaged candidates. People have overwhelmingly responded to the request to consent option (83 percent) in less than a day, with less than one percent have deleted their profiles.

When candidates feel that a company is respecting their information they are more likely to interact with the hiring process. Companies have gotten in on the action as well and 79 percent of SmartRecruiters customers have included a company or country-specific privacy policy. 63 percent have also internally trained their staff to properly process their personal data which is significantly more when compared to the rest of the world where only 10 percent of companies have enacted the same measures.

These efforts by and large benefit recruiters as they do not need to worry if their company’s management of candidate data breach GDPR compliance and they have Candidates more willing to engage with the hiring process.

SmartRecruiters’ efforts have made our customers some of the most prepared for GDPR compliance and because of that, they are not sitting in the same hot water as Google or Facebook at this moment. If you would like to know more about SmartRecruiters’ resources  Check out our SmartRecruiters’ GDPR Resource Kit or FAQ page for answers to all the most common recruiting questions concerning data privacy.