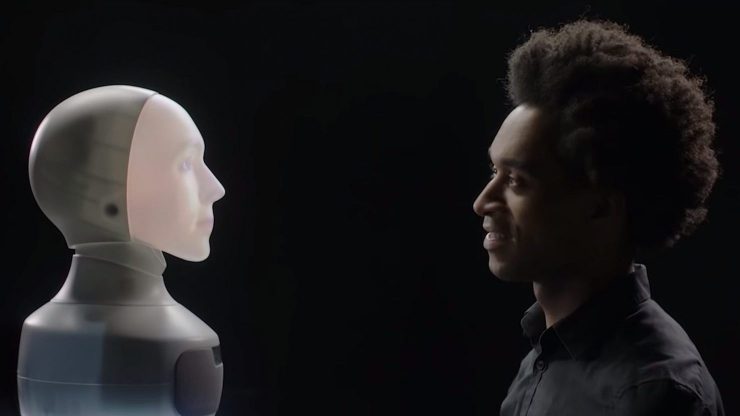 In the fight against unconscious bias, Sweden experiments with AI – but will robotic interviewers really catch on?

Meet your interviewer, Tengai: she’s friendly, observant, and did we mention she’s a robot?

Tengai’s 16-inch glowing face sits on a table at eye level with the candidate. She smiles and blinks forming empathetic facial expressions as she asks “have you ever been interviewed by a robot?”

For most people today, the answer would be ‘no’, but that might not be the case in five years. For that, we have to thank Furhat Robotics, creators of Tengai. The AI and social robotics company that has spent the past four years building a human-esque computer interface that can replicate our speech and subtle facial expressions. The idea being, a human-like robot is much less scary than machine-like one.

A few companies, like the Swedish recruitment firm TNG currently trialing Tengai, are experimenting with the use of robots in their early interviews, and many more companies already use some form of AI in their selection process.

Many people have reservations about using AI to make hiring judgments. ‘How much should we trust these droids?’ they wonder. Indeed, the question has its merits.

Proponents of the technology point out humans aren’t great judges of character or ability because we are all affected by unconscious bias, which impedes our ability to assess fairly. And what’s more, this bias is hard to shake – numerous studies have shown that trainings which aim to minimize unconscious bias’ influence in the workplace has little to no effect on future behavior.

On the other side, decriers of recruiting’s new reliance on AI-driven judgments point out that the underlying algorithms of these technologies can also be biased and given the homogeny of the tech and data-science field, we must be careful.

To grasp the argument for using robots in interviews, it’s first important to understand what unconscious bias is and how it occurs. As it has become a workplace buzzword, there’s often confusion around the actual defintion.

Dolly Chugh is an award-winning psychologist and Professor at New York University. She specializes in the psychology of human bias. Speaking on the 10% Happier podcast, she offered a very helpful example which frames unconscious bias in a way that’s easy to understand:

We may associate certain groups of people with certain attributes. But we probably don’t remember when that became part of how we think. This is because it’s all part of the flow of our unconscious mind. The unconscious mind represents the vast majority of our brain’s work. Unconscious mental processing is absolutely essential for us to function as human beings, but sometimes it can lead us away from being the person we’d like to be in certain situations.”

Reining in biases, as a recruiter, can be tough. First impressions and gut feelings count for so much during interviews. But left unchecked, unconscious bias can result in unfair judgments, overlooked talent, and ultimately, discrimination.

Robots designed specifically for recruitment purposes are generally much better than humans at making unbiased decisions about a candidate. This has already proven to be true through a recruitment experiment conducted in Sweden.

Since late 2018, Swedish recruitment agency TNG have been using an AI-driven robot head called Tengai to conduct first stage interviews in place of human recruiters. The results have shown an encouraging example of AI eliminating discrimination rather than amplifying it.

Tengai was built by Furhat Robotics. At first glance, it’s appearance is a bit disconcerting. It’s a disembodied robotic head with a friendly-looking human face. It’s placed on a table where it sits about eye level to the candidate. All this to ensure the interview proceeds in a way which most closely candidates are accustomed.

Unlike a typical interview, Tengai doesn’t engage in small talk. This ensures all recorded responses are work-related. Each candidate is asked the same questions, in the same order, with the same tone of voice. Tengai standardizes the process to a degree that even the most methodical human recruiters can’t match.

Crucially, Tengai knows absolutely nothing about a candidate’s race, religion, gender, appearance, or other visual/auditory factors that commonly give rise to unconscious bias. Once the interview is complete, human recruiters then receive a transcript of the answers. It’s then up to them to decide whether or not to move that person forward.

By replacing human recruiters with Tengai, TNG and Furhat feel they are creating a fairer hiring process that still retains a ‘human’ touch. But it’s important to keep in mind that robot interviewers bring their own set of limitations and challenges.

Research shows unconscious bias often influences whether or not someone advances to the interview stage. Tengai and other robotic interviewers offer zero benefits when it comes to creating fairer resume selection processes. So, unless such robots are accompanied by other bias-tackling measures throughout all other stages of the hiring process, they are an incomplete solution to the problem.

Robots like Tengai create an extremely rigid interview process. And while standardization offers some benefits, it isn’t perfect. It prevents the natural ebb and flow of a typical human conversation. For example, a candidate may mention something in passing that grabs an interviewer’s attention. If they feel the information is highly relevant to the role, they can ask the candidate to elaborate or clarify. This helps prevent great candidates slipping through the net due to unintended omissions in their answers.

Even when the rationale for using robots is clearly presented, some candidates are not going to like being interviewed by a robot. It’s easy to see how the process may be perceived as cold and clinical by some candidates. As a result, this may cause significant damage to the employer brand. Others will welcome the change, but introducing robot interviewers will undoubtedly polarise candidate opinion. So it’s important to weigh up the risk/benefit ratio, which will vary widely from business to business.

Not All Technology Is Similar

When selecting any new technology for a hiring process it’s important to consider what it actually does. Some robots are made to standardize the initial interview process to root out bias, while other tools use algorithms to evaluate the candidate’s facial expressions or speech. With the latter example, especially, organizations need to rigorously question the way the AI is making judgments and track if those judgments are leading to a homogeneous talent pool.

James Deeney is a content editor at Venturi, a specialist IT recruitment agency. When he isn't writing research-driven articles on technology, leadership, and staffing, he enjoys listening to podcasts and trying to maintain a consistent meditation practice.