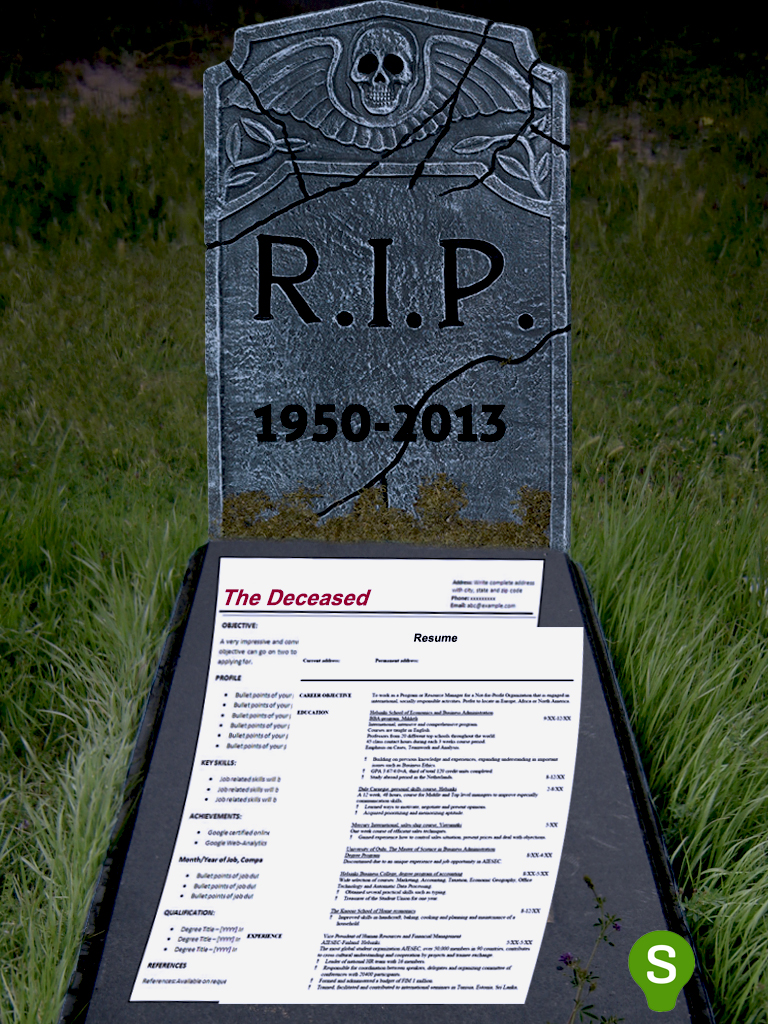 Don’t Cry at the Resume’s Funeral

No longer does the resume satisfy an employer’s needs when it comes to conducting a thorough evaluation of a candidate. Employers are now focusing more on a candidates’ web presence, social profiles, Google search results, recommendations on LinkedIn, candidate assessments and much more. Candidates are no longer able to cram information into a resume and use that as the sole piece of information to be hired from.

The resume as we know it is dead – and quite frankly – has been dead for a few years now. Not only are creative job roles forcing candidates to think outside the box, but also they’re asking for a more interactive application to complete the process. One great example is Heineken’s quirky and out of the ordinary job interview process (see below). They took three candidates and put them all through a serious of weird interview stages eventually rewarding one of the candidates with a job in their marketing department. These types of viral interview techniques are on the rise and the traditional resume keeps getting nails put in its coffin.

Fortune 500 companies have managed to integrate all aspects of social media into their recruiting function. Recruiters, HR Directors, and Chief Human Resource Officers are rebuilding their entire strategy as it relates to hiring.

Candidates, now more than ever, are developing both creative and innovative ways to get their own personal brand out there in hopes to land their dream job. From creating blogs specific to job opportunities to the famous “Hire Me” campaigns. These recruiting practitioners are now able to build out communities, develop relationships with an actual person and no longer rely on a piece of paper to tell them everything about a candidate. Recruiting, as we know it is no longer the same and won’t ever be the same.

The funeral of the resume is one of the most significant developments in the recruiting industry and companies are popping up everywhere to help foster a relationship with an actual person instead of a piece of paper. Recruiters aren’t waiting for candidates to foster innovation, but they’re requiring innovation to be hired in the first place. So instead of crying at the funeral of the resume, I rejoiced and became ready to tackle the new age of recruiting.

Jessica Miller-Merrell, SPHR is a workplace and technology strategist specializing in social media.  She’s an author who writes at Blogging4Jobs. When she talks, people listen.  Image Credit Ely Tran.

In 2012, SmartRecruiters saw the number of candidates who chose to attach a social media profile to a job application jump from 22% to 40%. Tune in to our CEO sounding off on the death of the resume: