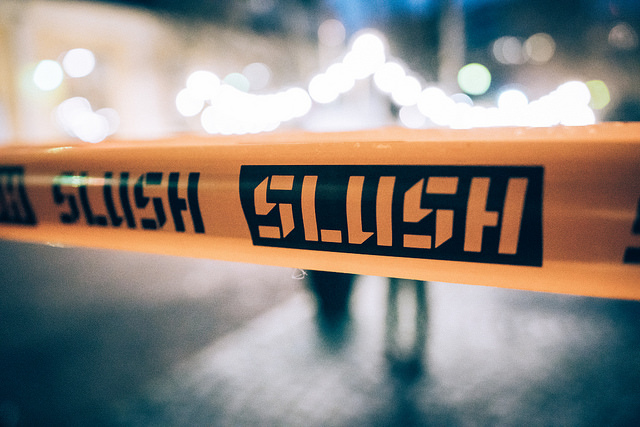 Fear and Loathing in Helsinki

Over a lightning-fast 48 hours in the slushy Finnish capital, the hippest tech-fest on earth puts start-ups, VCs and uber-nerds into a socio-cultural blender and comes out as more than the sum of its parts.

It’s 10:46 am when the revelation begins to take hold. All around are open booths, folding chairs around black tables at which hundreds of meetings are taking place, business cards being exchanged, deals being done, future collaborations being planned. Bodies hunch close over laptops under pink neon strip lights, the odd subwoofer drop from the laser-lit main stage nearby the only sound permuting the white noise of business chatter, and there’s only one empty seat in the house, the one across from me.

“Maybe Lars* got lost,” I tell myself. The subterranean sprawl of the Messukeskus is part of the largest convention center in the country, and over 17,000 guests will have shuffled through by wrap-time. Not bad for a conference that up until three years ago pulled a few thousand at best. How this many people thought traveling to Helsinki in winter was a good idea is as improbable as it is impressive, and I wonder how many turn up simply to spite the universal laws of probability that would deem this scenario most-likely-to-fail on a global tech-festival report card. The shitty weather is how Slush’s self-deprecating marketing campaign endears itself to those who would pay upwards of 600 euros to be here, not even to pitch or invest, but just to be in on the joke.

“If you think about it,” said my travel companion Robin Haak, SmartRecruiters’ VP of Global Operations, at dinner before the festival began, “Helsinki makes sense. It’s a short flight from anywhere in Europe, and can also be the connection point between New York and Tokyo.”

“I hadn’t thought about that,” but it makes sense. It’s always the underdogs who adapt most quickly to globalism. Go see a movie in the former glorious empires of France or Germany, everything’s dubbed, because their languages to them are the best and demand primacy, whereas in, say, Holland, a country that as far back as the Age of Seafaring Pillage had to rely on wits more than cannons, foreign films are subtitled, because they know survival comes through cooperation, not domination. Order a beer in Helsinki, in English, you’re not going to be stared at or asked why you are in Finland not speaking Finnish. You may be the one, however, to inquire just how a beer can cost so much money.

“And people come for the atmosphere,” Robin continued. “No other conference this size still has that laidback, family vibe. You can go to other huge festivals, but you always seem to come out feeling like you didn’t get anything done.”

A news reporter is doing his P-to-C as he walks towards his cameraman, who waves me out of frame with his hand. “What? Is this not a reasonable place to park myself?” Having given up on a clean background shot, the reporter – one of 600 journalists trying to get a coherent story out of this most unconventional convention –  instead pivots and uses the backdrop to illustrate just how unique it is to have so many people being so productive in a place mood-lit like an underground discotheque in Blade Runner.

“Maybe Lars got sidetracked,” I reason. Slush has installed three stages for speakers and panels – Al Gore kicked things off yesterday. Touché – there are hundreds of booths display everything from the latest in mobile gaming to cutting-edge robotics, and there’s another meeting area as massive as this one over there past the earnest team of volunteers ferrying overwhelmed guests to their assigned tables.

Over there yesterday, in one of a series of soundproof pods, I met Marjo Lautjärvi, whose day-job is helping business people relocate to Finland, though the Finnish government probably wouldn’t say no to her being the country’s unofficial brand-ambassador. “Slush is great for Finland,” she says, “we need to get our name out there more,” and by extension, get more people in. “It used to be only political or corporate jobs for foreigners here, and there was always a set term, but now people are moving here for work and staying on, open-ended.”

But while Marjo is trying to convince people to stay, business development director Eric Kucharsky is trying to get them to leave, or more, follow him to Montreal, which, much like Berlin continues to do, attracts tech startups who might not be ready to drop the kind of cash required in Silicon Valley or New York, or even Toronto or Vancouver. It may be frigid outside, but this Finnish winter is fertile soil for Eric to plant his seeds. “There is an understanding, there are certain cultural similarities between Canada and the Nordics,” he said.

“Culture. You mean they can handle all that snow, right?”

10:51. “Maybe Lars hit it too hard last night and he’s hungover.” I’ve never met Lars, but with all the extra-curricular shenanigans on offer – What other conference is cool enough to have its own sauna area, and what kind of cretin saunas sober? – you can’t much fault the guy for indulging. There have been parties. There have been after-parties. One piece of advice I received before flying in was, “Don’t book any meetings before 10am.” Maybe for Lars it was 11.

10:55, no denying it now, I’ve been stood up. But once you’re locked into a half-hour time slot amongst 6000 scheduled meetings, the tendency is to keep your seat until you absolutely must give it up. These things have turned out to be a hot ticket. Sitting here you’re a man with purpose, the forethought of reservation a sign of professionalism unattached to the louts up there at the cafe, unofficially flaunting their wares amidst half-eaten sandwiches and beer cups empty from assuaging the sting of a failed pitch. “Not me,” I think, “I am a doctor of journalism and I schedule my meetings properly, man.”

The 11 o’clock guys are circling, a volunteer corroborating with her iPad that this will soon be their table. It’ easy to tell who’ll be performing what function when they sit down. The rakish, stubbly twentysomething holding his laptop to his chest like a school binder, and the man in the suit getting close to the age where business men’s metabolisms start to give out.

“Maybe Lars is having brunch with Al Gore,” I surmise, making my way to the panorama cafe for a sandwich and a beer, there amongst the great unwashed and the squares, to contemplate what this all means. “Slush isn’t about what’s happening right now,” Robin had told me, “it’s about what will be happening in five years.” The way things are going, there will be enough recruitable talent to populate Helsinki and Montreal, and Slush’s only problem will be getting too big, and how to preserve the balance of intimacy, productivity, and slick production. (Also now they’re going to have to top Al Gore as opening speaker.)

And as the second and final day closes, the waves of attendees surge up the main stairs to ground level and into the light – far too many staring at their smartphones while doing so –  and the vast and cavernous cloakroom performs a time-lapse film-reel in slow motion. And once you forget about being stood up by Lars, you can look out over the Slush conference foyer, and with the right kind of eyes, see where the high water left its mark, from where things will resume over two slushy Nordic days in 2018.