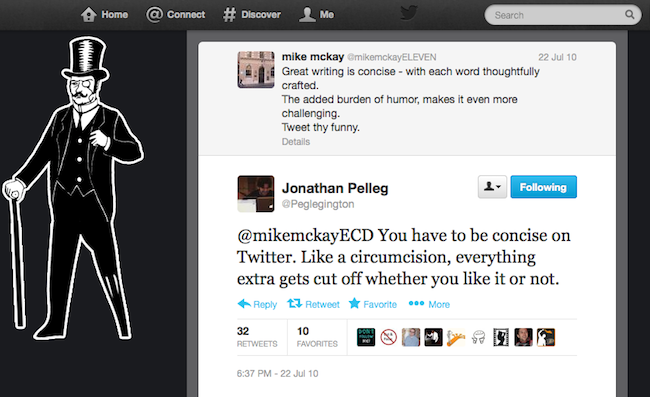 Twitter makes it possible to put your 140 characters in front of the recruiter, hiring manager and CEO who make a large percentage of hiring decisions. The three steps to getting a job through Twitter are to market your skills/personality, tweet at hiring decision makers, and look out for who is hiring. Marketing your skills and personality is the first (and most reliable) step.

But how exactly does one join Twitter (or move from “yeah I have Twitter but I don’t tweet much,” or “Yeah, I tweet but companies don’t care”) to successfully landing a gig at a great company?

Trying to get a job from a single tweet amongst the 400 million tweets a day can be daunting. Before taking this approach, research who – specifically – would gain value from your work. In 2010, renowned advertising firm Saatchi & Saatchi Exec Mike McKay tweeted “I have a writer position worth $70k. Funniest twitter response gets it.” People weren’t sure if he was serious or not. But the brevity of Twitter lent itself perfectly to gauging the quality of copy. While you may not agree with the winning tweet, Mike McKay did, and the retweets and favorites provide social proof.

The winner Jonathon Pelleg (aka “Pegleg” as he prefers to be called), had this to say about the job search experience:

“Well I heard about the job through Twitter, applied through Twitter, and used Facebook and Twitter to get votes when Saatchi wanted the public’s opinion on what was funniest (still unclear on whether the votes ended up mattering).  So, really, no part of my getting the job wasn’t on social media. Aside from that, when I was still hunting for jobs I used LinkedIn an incredible amount. “

I know what you’re thinking – “nice little story” – but could recruiting on Twitter really become the norm?

In February 2013, Enterasys decided to use Twitter exclusively for hiring, as reported by Wall Street Journal in “The New Resume: It’s 140 Characters.” To be considered, candidates had to tweet with the hashtag #socialCV and have over 1,000 followers. Not only did Enterasys make hires, they also grew their social media following.

“I am fairly certain I am going to abandon the résumé process,” says Enterasys CMO Vala Afshar. “The Web is your CV and social networks are your references.”

Now, I think it is very clear that hiring for advertising positions is thriving on Twitter. The quality of your messaging, size of your audience, and level of engagement is in an easy to digest form. But what about other industries? The simple of it, they are catching up.

The job interview – in a bit of crude summary – can be boiled down to: (1) what does the candidate talk about? (2) what sources do they cite as authority? and (3) what has the candidate done? Twitter can be used to give the public this microcosm. When speaking on how to use your Twitter account for business I always advise, Three-fourths industry / work position content, one-fourth personality. If someone views your Twitter feed, here is how to make it clear, I know what I am doing when it comes to this field:

Want to get a job in sales? Research and use #sales hashtags, tweet wisdom you believe in about selling, mention your big sales, link to the best new articles/examples on sales trends, and give the world a few lines of how you talk.

Want to get a job in design? Research and use #design hashtags, tweet  wisdom you believe in about design, mention your big projects, link to the best new articles/examples on design trends, and give the world a few lines of how you talk.

Want to get a job in X? You get the picture.

Last and definitely not least, is follow the hiring decision makers. In the earlier example, Pelleg probably would not have heard about the contest unless he followed Ad Exec. Mike McKay. He wanted to work at an ad agency so he followed Ad Execs – simple enough.

What ten companies do you want to work for? Follow them and their executives. Especially make sure to follow and Tweet @ them if their twitter careers account or company careers page says they are hiring for the talents you possess. At SmartRecruiters we strive to bring transparency to recruiting, and part of that is a better application process. Every job posted through SmartRecruiters says who posted it. Go ahead, follow that hiring manager on Twitter.