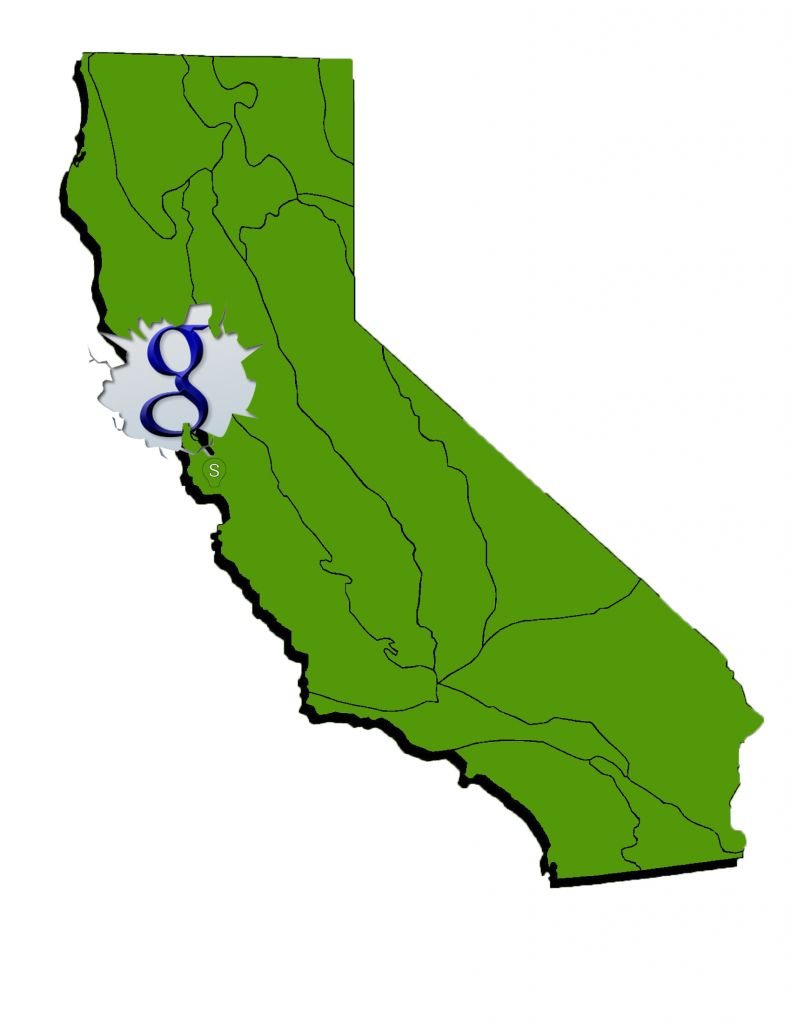 The Good, the Good and the Good about working at Google

It’s almost ten times harder to get a job at Google than it is to get into Harvard. Is it because it was crowned the Happiest Company in America?  In 2011, CareerBliss.com ranked Google #1 after more than 100,000 worker-generated reviews from over 10,000 companies. Scores were based on such factors as work-life balance, relationships with bosses and co-workers, compensation, growth opportunities, a company’s culture and the opportunity for employees to exert control over the daily work flow.

Getting a job at Google is equivalent to running the gauntlet. They have the reputation of  having a tough application process. Just how hard it is to land a job at Google? Here’s an inside look courtesy of Staff.com: 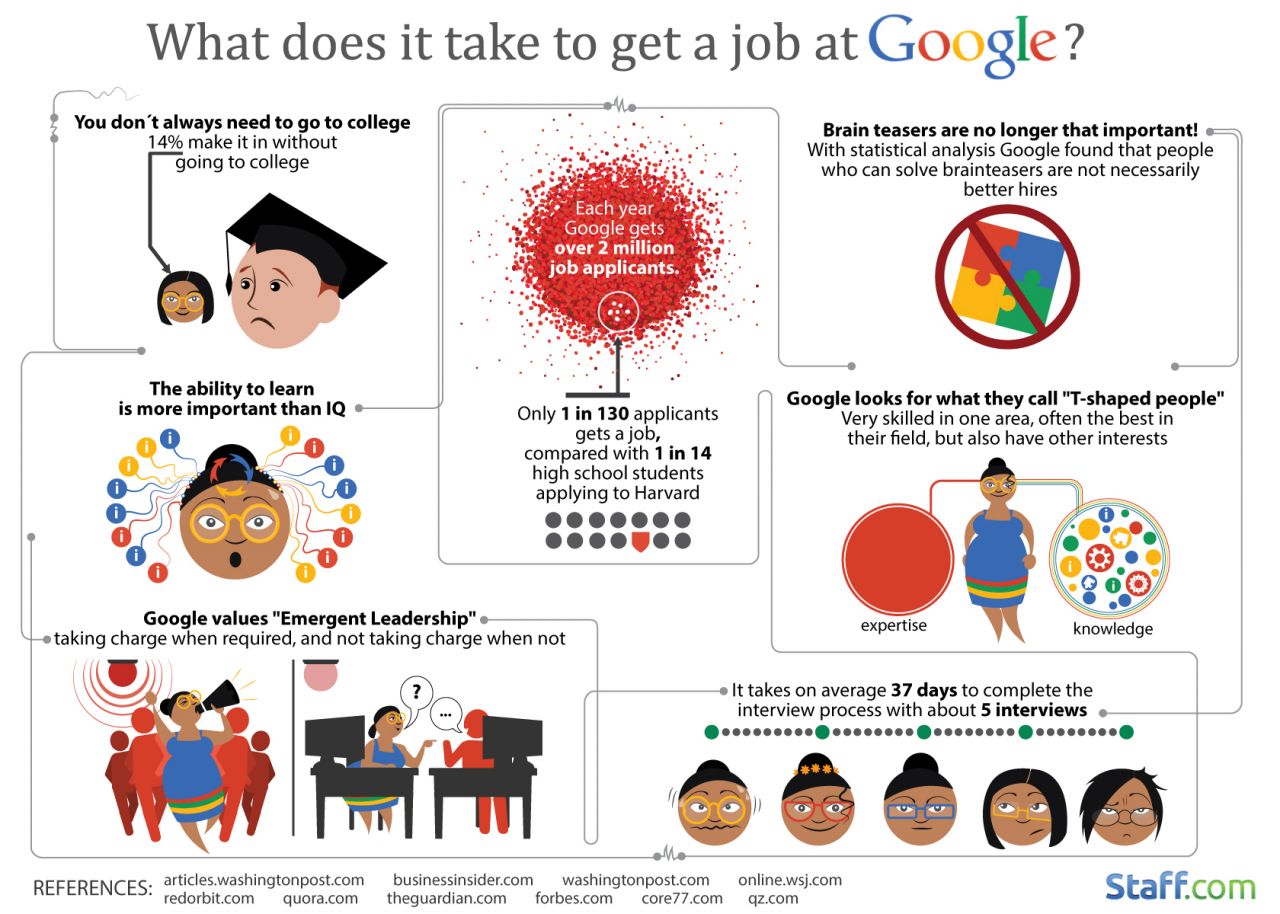 You don’t become the happiest company by mistake. It’s a product of thoughtful design and ultimately culture. Let’s explore the 15 reasons why:

1. Dollars and Sense – With billions of dollars in revenue every year, Google pays some some the highest average salaries in the tech industry.

2. On Purpose –  Google has always pursued a noble cause. The company conducts business with a simple motto,”Don’t be evil.” Its mission is to organize the world’s information and make it universally accessible. Here is Founder Larry Page talking about both purpose and the theory of abundance,

“We have somewhat of a social mission, and most other companies do not. I think that’s why people like working for us, and using our services…Companies’ goals should be to make their employees so wealthy that they do not need to work, but choose to because they believe in the company … Hopefully, I believe in a world of abundance, and in that world, many of our employees don’t have to work, they’re pretty wealthy, they could probably go years without working. Why are they working? They’re working because they like doing something, they believe in what they’re doing.”

3. Caring – No stone is left unturned in their quest to provide a welcoming work environment for employees. Actions speak louder than mere words. Why is caring so important to the company? According to Google’s Chief People Officer Laszlo Bock:

“It turns out that the reason we’re doing these things for employees is not because it’s important to the business, but simply because it’s the right thing to do. When it comes down to it, it’s better to work for a company who cares about you than a company who doesn’t.  And from a company standpoint, that makes it better to care than not to care.”

4. Creative Outlet – 20 percent time. Google allows its employees the option to use up to 20 percent of their work week at Google to pursue special projects. That means for every standard work week, employees can take a full day to work on a project unrelated to their normal workload. Google claims that many of their products in Google Labs (i.e. Gmail) started out as pet projects in the 20 percent time program. Last year Quartz reported that 20 percent time had been abolished, but Google responded saying its very much alive and kicking.

5. A Voice – The Google-O-Meter gives all employees a voice on employee suggestions and potential cultural changes . According to a post by Diana Ransom,

“Google’s Chief Culture Officer Stacy Sullivan implemented the company’s charting tool, the Google-O-Meter, to gauge the popularity of employee suggestions, such as housing more doctors on site or bringing overseas employees to headquarters for a visit. “It wasn’t something that we would just go and implement for them,” she says. “Their suggestions had to be reflective of things about the culture that [many] people wanted to change.”

6. Benefits Beyond the Grave – There is a Google Perk that extends into the afterlife.  Should a U.S. Googler pass away while working for Google, their surviving spouse or domestic partner will receive a check for 50% of their salary every year for the next decade. Even more surprising, a Google spokesperson confirms that there’s “no tenure requirement” for this benefit, meaning most of their nearly 40,000 employees qualify.

7. Modern Family – Google gives employees in same-sex relationships extra cash to cover their partners’ health benefits.  Currently, when receiving partner health care coverage, same-sex domestic partners are subject to an extra tax that straight, married couples don’t have to pay. Google is taking the burden of paying this tax on itself by compensating partnered LGBT employees for the amount of the tax, which comes to a bit more than $1,000 each year. This benefit will also cover any dependents of the partner in the same-sex couple.

8. Bathrooms – Googlers have access to some of the most high-tech toilets around ? These Japanese imports offer washing and drying of your nether regions as well as the mysterious “wand cleaning.” Both the wash water and the seat itself can be warmed or cooled depending on your preference.

9. Kingpin – The company knows how to roll. Google has a bowling alley for employees.  Here’s a YouTube video providing a quick peek at the lanes.

11. Wellness – The Googleplex’s has some interesting lap pools. The outdoor mini-pools are like water treadmills: a strong current allows the Googler to swim and swim and go nowhere. Luckily, lifeguards are always on duty in case someone gets in over their head.

12. Team Building –  Google’s Conference Bike is used as a team-building exercise for new employees. It has four wheels and five riders who work together to move it around. (Source: PC Magazine)

13. Collaborative Space – According to Jonathan Strickland,“Google’s corridors are designed and set up for impromptu information sharing. Offices don’t resemble a typical corporate environment. Google arranges the workstations so that groups of three to four employees who work together sit in the same area. During the design phase, architect Clive Wilkinson faced a challenging problem: how do you group people together and still give them an environment in which they can concentrate on work without distractions? And how do you do it without turning Google into a labyrinth of cubicles? Wilkinson decided to use glass walls to divide the space into clusters. This design cuts down on much of the ambient noise inside the office. It also allows sunlight to filter in through the entire office. Each glass enclosure has a tent-like roof made of acrylic-coated polyester which contains the room’s lighting and sprinkler systems. Google executives want employees to be able to bounce ideas off each other. It’s the c­ompany’s hope that by encouraging interaction, workers will have greater job satisfaction and may even create the next big Google product.”

14. Food & Beverage – Is the way to an employees heart through their stomach? One of the most often cited perks of working at Google is the food. Google feeds its employees well. If you work at the Googleplex, you can eat breakfast, lunch and dinner free of charge. There are several cafés located throughout the campus, and employees can eat at any of them. The main café is Charlie’s Place. The café takes its name from Google’s first lead chef, Charlie Ayers. Before creating meals for Googlers, Ayers was the chef for the Grateful Dead. Although Ayers left Google in 2005, the café still bears his name. The café has several stations, each offering different kinds of cuisine. Options range from vegetarian dishes to sushi to ethnic foods from around the world. Google’s culture promotes the use of fresh, organic foods and healthy meals. But when everything is free and you can eat whenever you want, it’s easy to go overboard. That’s where the Google 15 comes in. It refers to the 15 pounds many new Google employees put on once they start taking advantage of all the meals and snacks.

15. Openness / Transparency – One of things shaping culture at the search leader are “TGIF” meetings. They tend to happen most Fridays, said Craig Silverstein, who joined the founders as Google’s first employee in 1998.

Perhaps there is a deeper reason for creating a more welcoming and fulfilling workplace. Here is a quote from CEO Larry Page’s Commencement Address at the University of Michigan in May, 2009:

“My father’s father worked in the Chevy plant in Flint, Michigan. He was an assembly line worker…My Grandpa used to carry an “Alley Oop” hammer – a heavy iron pipe with a hunk of lead melted on the end. The workers made them during the sit-down strikes to protect themselves. When I was growing up, we used that hammer whenever we needed to pound a stake or something into the ground. It is wonderful that most people don’t need to carry a heavy blunt object to work for protection anymore.”

This article was written by Stan Phelps from Forbes and was legally licensed through the NewsCred publisher network. Learn more about SmartRecruiters, the only platform managers and candidates love.