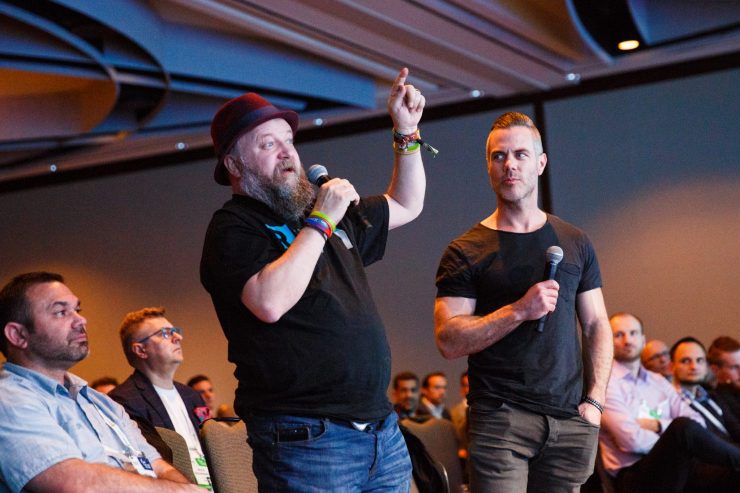 Have Fun and Let the Machines Take Over: Bill Boorman’s Vision for the Future

After 36 years in recruiting, the creator of Tru Events knows what this industry needs: conferences that are fun and robots that do 80 percent of our work.

Bill Boorman, aka the king of social recruiting (don’t call him that to his face though), will be joining us February 26-27 at Hiring Success 19 – Americas, in San Francisco. He’s the guy who breaks all the rules and always wears a hat. You’ll see him hosting Battle of the Bots or poking in and out of sessions looking for the next crazy, interesting thing to bring to the world of recruiting. You definitely can’t miss him and here’s a little preview to show you why.

It started, like any good story, at a recruiting-fest in Toronto. Bill looked around the hot, noisy venue, which was actually a university lobby, and decided he needed some fresh air.

“I’m going outside to sit under that tree and talk about recruiting,” he shouted, “anyone who wants to join me can.” And with that, he made haste to the tree. As it turned out, he wasn’t the only one who needed to get out of the stuffy room because 100 of the 140 attendees followed.

As Bill shared his recruiting wisdom from beneath that tall arbor, it made him realize that this informal session was how he wished every conference could be: the opportunity to mingle casually, to talk shop, and more often than not, the best conversations he had were post-formalities, over a beer.

So that’s the day Bill decided he wanted to make an event that felt like more like this casual, informal moment beneath the tree, which he dubbed an ‘unconference’. No over-managing, no speaker applications, no speeches. Just discussion, connection, and some drinks.

This idea grew into what are now called Tru Events, which can take place anywhere in the world, wherever someone wants to collaborate with Bill to make one.

Although I see a schedule posted for today’s Tru Berlin Unconference, held across the grounds of the Deutsche Telekom startup incubator Hub:raum, Bill assures everyone that they can come and go as they please:

“The point of a Tru Event is to make it right for the attendees, so people can really make it right for them and in the spirit of the city they are in. You see us here in Berlin: 4 pm, full Christmas garb, everyone drinking gluhwein. That’s perfect for here. For another city, it might be different.”

Bill is dressed like a superhero version of Father Christmas. A red floor-length cape instead of a traditional jacket catches the wind as we walk outside. The white faux-fur trim highlighted by the moonlight makes for a dramatic picture as he leads me into a breakfast nook where we begin our chat, we are settled between two ongoing sessions – one a roundtable on technology that can help people find jobs overseas and the other a discussion on inherent bias in recruiting.

The participants are lounging on oddly shaped and uber-cool ergonomic furniture that has become the hallmark of startup workspaces. We are all wearing Santa hats and holding gluhwein. Everyone is chatting happily but, as I look around the merry group of cap-wearing HR heads, I begin to worry that a forced icebreaker is imminent.

Bill starts off with his vision of how people would participate in a Tru Event:

“Let’s say someone wanted to come to the conference and just hang out at the cafe and network without going to a single session. Perfect! Equally, if someone wants to go to every session, take notes, and not say a single word, that’s ok, too.

People can have the experience they want. You don’t need to come in and moderate because the groups sort themselves out. We want to create an environment where people can be themselves and participate in a way that’s meaningful to them.

If you can’t think of something worse than being made to participate in an icebreaker, no one is going to make you stand up and say two truths and a lie.”

Relief. I wonder if he can sense a weight has been lifted from my soul knowing I won’t be subject to any forced corporate merrymaking. I begin to feel at ease with this wisecracking Kris Kringle, who can balance a mug of hot spiced wine comfortably on his knee while waving away the shushes we’re getting from the sessions on either side:

“Listen, take notes, speak, lead a session – do what you want. There aren’t any speaker applications. People will vote with their feet..”

That means speakers don’t have to be approved by the conference chair, instead, someone can simply sign up and they are given a time and a space. If their subject is compelling enough, people will come.

It seems simple so why don’t more conferences subscribe to the Boorman method? Bill points out that for some, an unconference is a hard sell:

“After a traditional conference, people will leave with five or six really clear things they want to execute once they return to work. Whereas an unconference value is harder to quantify. You’ll leave with a lot of leads both in terms of people and ideas. You’ll have new topics to explore and people you actually want to connect with in the future.”

Bill has been called “the king of social recruiting” by China Gorman, the managing director of  Unleash, one of the best-known HR Festivals in the world which welcomed 9,000 attendees globally last year. It’s a title Bill says is unearned, even embarrassing, although this modesty is dubious given that the appellation is prominently positioned in his LinkedIn bio.

“I never even used the term social recruiting,” he insists. “It’s just recruiting. Recruiting used to happen in my office with a pen and paper or maybe through the newspaper. Now we’re in the mobile age and moving into the data age so now recruiting happens online. Wherever the people are, that’s where you want to be.”

Despite the pitfalls of throwing HR-world caution to the wind, Bill would like to see a little more of what he likes to call the ‘explorer attitude’ from his colleagues in the recruiting industry:

“I like to try things I don’t think will work first, so I at least dismiss them. Instead of ‘best practice’, I do ‘test practice’.

I want to feel like a pirate or an explorer, trying new things, and these unconferences give me that opportunity.”

The unconference attitude of experimentation and individual experience is catching on, even the big conferences like Unleash and HR Innovation & Tech Fest have pivoted towards tailored experiences for each attendee with roundtables, panels, and group discussions.

“I think Tru events and unconferences have made the attendee experience a key factor in conferences success. Basically, we made the idea of having fun at a conference mainstream.”

So you’re welcome, HR! Because when Bill started in recruiting at the age of 16 (36 years ago if you’re counting) there were just trade shows and lectures, a far cry from the interactive expos with hands-on demonstrations and hipster baristas we enjoy today.

Bill hopes these innovations in how we share information as an industry will lead to changes in how our industry actually works. Because despite all the new technological tools he’s seen come and go the way HR and recruiting is done seems to be stuck. Bill elaborates:

“A good example of how the industry of recruiting and HR has been pointedly unimaginative is the way we test the quality of matching algorithms. Companies would ask their best recruiters to fill 30 jobs from 500 CVs, and if the algorithm for the matching technology chose the same list as the real-life recruiters it was considered good.

So what we are getting from tech is not better, we’re just increasing scale and speed. The actual outcomes are the same.”

He’s got a point. If we make the matching algorithms imitate the human recruiters we’re just imbuing our technology with the same inherent biases, and what’s better about that?

“We should judge technology as good if it makes different decisions than us otherwise we’re just making the same mistakes faster.

Applicant tracking systems are essentially just bigger filing cabinets. The main thing we’ve done with technology is increase the number of people in our system.”

I didn’t imagine such a bleak view coming from such a jolly man. Perhaps sensing my disillusionment, Bill does offer some hope:

“Well ages are getting shorter and shorter and with each new one, there’s an opportunity for change. I consider the last age to have ended when we moved from desktops to mobile devices. Now we are moving into the data age and the question is how are we going to use this massive amount of information.

All the data that’s been created can be used for good or bad. Will we use it to make people’s lives and jobs better or will we use it to separate people and control them? – that’s the challenge we have now.”

His solution? Let the machines take over:

With nowhere to hide in busy work and paper pushing Bill foresees some growing pains in the industry.

“It’s not a palatable truth to say ‘this machine can select better people than me and I’ve been doing it for 20 plus years. Its natural to be wary, no one wants to be replaced. What they need to do is to start looking around at the busy work like scheduling and sourcing and say ‘how much better would my job be without all this shit?’”