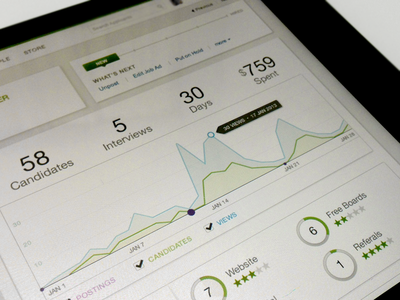 “If I can get a meaning across without speaking I will,” explains SmartRecruiters Lead Designer Jason Hegyessy.

As a UX/UI designer, Jason brings the Scandinavian philosophy of minimalism and functionality to the SmartRecruiters’ platform. He studied traditional illustration at the Academy of Art, spent a few years mastering the ways of the web via the freelance world, and most recently, worked for Apple.

“The designs that last are extremely simple,” says Hegyessy. “They say ‘no’ to the other things that people might say they need to include. They reduce everthing to the bare necessity.”

Everyday Hegyessy reads Daring Fireball, a tech and Mac news blog. The site design has not changed in 7 years. A testament to fact that the internet is not just fads. Remarakable ideas, content, and design can pass the longevity test. Hegyessy believes, “Good design is like a timeless suit; it never goes out of style.” Not to say that everything that can be done has already been done; a good new suit can always be designed. Hegyessy points to Microsoft’s new homepage (designed by Paravel Inc) as an example of where modern design is heading.

When asked about influences, Hegyessy says, “I don’t follow a specific person. Good design is everywhere.” Before conceding, “There is also bad design everywhere. Graphic design is about solving a problem. People often don’t know how to ask the right questions; that’s why there is so much bad design.”

For Hegyessy, everything in front of the user must have purpose.

“It’s what you leave out. Why did I use red? Give some people a pallet and they’ll use every color, but why? The truth of the matter is space structures the universe.”

Through his years, Jason has formalized a process. Hegyessy’s Design Rules:

1. Put everything that will be on the page – all the content – just put it in there.

2. Can anything be removed? Is it functional? What would make a task easier?

3. After much deliberation, delight the user. Create visually appealing design, but never at the expense of simplicity and functionality.

Throw it all in there. Strip it all down. And make it elegant. “I’m a man of few words,” says Hegyessy in a few words. For Hegyessy, it’s time to start up.

SmartRecruiters is the Hiring Platform. Everything you need to source, engage and hire top talent.