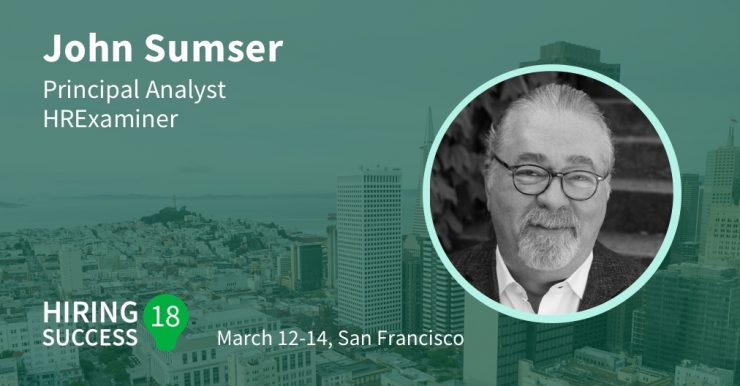 Ahead of his slot at Hiring Success 18, this industry stalwart who says he’s worked at least 12-hour days, 7 days a week since he was a teenager, expounds on some of the core topics of today’s HR Tech.

John Sumser is the Principal Analyst at HR Examiner, where he reviews and evaluates HR and Recruiting software products. He has earned a reputation for cutting through the hype, uncovering the truth, and has most recently authored The 2018 Index of Predictive Tools in HRTech: The Emergence of Intelligent Software – the most comprehensive assessment of so-called artificial intelligence in HR to date.

You can catch John alongside several other luminaries and thought leaders at Hiring Success 18, March 12-14 at the Hyatt Regency in San Francisco – register here! – but in the meantime, we caught up with this HR Tech wizard, a man who’s been around since programming involved punch cards, to get some in-depth info on our industry’s current state of affairs.

What does Hiring Success mean to you?

Hiring Success means getting the right people into the right slots at the right time. The problem is challenging because jobs, organizations, technologies, markets, and people all change. And, they all change in different ways at different speeds. You simply cannot get to Hiring Success by matching a person and a set of job requirements. That is almost always a recipe for failure.

Where on a company’s list of priorities should “recruitment” be, and where is it more often in reality?

That’s sort of a trick question. If you measure the answer to the question in resources applied to the recruiting department, there is a mismatch between the stated priority and the budget reality in most companies. But, if you talk with the hiring managers and potential co-workers, the priority is high. Unfilled positions mean extra work for the people who would be co-workers. But, the recruiting department, which is often viewed as an administrative function, is funded and managed as a cost center.

I’ve been blessed with the opportunity to work with everyone I ever considered a hero or role model. I think I am unusual in that regard. The list is long. I’ve worked 12 to 14 hours a day, 7 days a week since I was in my teens. That means I have two or three times the experience of someone who worked a five-day, eight-hour work week. I’ve been an engineer, a software developer, a public company board member, an industry analyst, a public speaker, a product design and messaging professional, a writer, a magazine publisher, a Capitol Hill intern, an R&D manager, and now, a teacher in a law school. In each setting, I’ve encountered role models and schnooks.

How would you describe what’s happening in HR tech right now, and where do you see things going this year and beyond?

Like much of the technology sector, HR Tech is being flooded with money from VC and private equity sources. There’s been a global change in the way Western economies think about the Research and Development that this money finances. It used to be that R&D was a roomy universe where researchers experimented broadly. Today, the R&D team, usually in the form of a small startup, has to both break the state of the art and produce revenue. Sadly, the result is a narrow focus and small accomplishments. Companies and their investors are trying to develop solutions without having an adequately deep understanding of the problem they are solving.  This is particularly true in HR where we are dealing with people, organizations, jobs, technologies, and evolving markets. We don’t understand any of these things very well.
There will eventually be an economic downturn. The real question is, what things will survive that change?.

As we get better at measuring people, we are going to learn important things. Today’s HR and Recruiting technology is far more primitive than we imagine. The fact that we don’t see it that way s significantly slowing our progress.

What’s your take on AI? Is it really AI or just a marketing catchphrase? What will actual AI in recruitment look like?

Recruiting usually results in failure. It is not a problem with understanding requirements precisely or being able to reduce the pile of inbound resumes. It is the result of having a too-shallow understanding of the actual problem.
Fully functioning AI is a conversational intelligence capable of understanding and disagreeing with your choices. Today’s predictive/intelligent tools are generally impressive uses of statistics. Calling it ‘AI’ focuses the conversation on how the software was built and away from whether it does a good job.

What are the most urgent problems that need to be addressed in the recruitment industry?

The most important questions involve ethics, decision making, and the drive to have simple answers to complex problems. It is normal for people to relax and assume that the machine knows what it is doing. I do this when I let Google tell me where to turn. But the problem is as old as computing…garbage in, garbage out. The decisions we are entrusting to machines are very difficult to audit. We don’t have a clear picture of what we are missing or what we are giving away.

You’ve said that the real cost of technology isn’t technology itself. Can you elaborate a bit on how that statement hold in 2018?

The real cost of technology is the cost of using and managing it. The software license is a trivial component of the overall cost of using a technology. Our report, The 2018 Index of Predictive Tools in HRTech: The Emergence of Intelligent Software, defines the various elements of cost of ownership. Before you buy any software, you should have your own view of the Total Cost of Ownership and have worked with your vendor(s) to understand and manage it. Singularly important are the costs of changing methods both to start using something new, and to stop using it sometime later.

With technology changing so rapidly, do you see clear gaps in generational comprehension and adaptation? Is tech moving too fast for older members of the workforce to stay up to date?

The idea that old people have learning disabilities related to age is a symptom of ageism. It is particularly rampant in Silicon Valley. One sees what one expects to see. Generally, I see older people being impatient with how long it takes young people to learn basic things.

With your breadth of experience from a time of no internet to now, do you see yourself as a guru?

I’m a student. I follow my curiosity where it leads me.

What about this industry do you find the most satisfying? What frightens you?

The intersection of technology and people is where I’ve always wanted to be. I study people, their organizations and the technology that binds them. I am endlessly fascinated. I’m a little scared that Stanley Milgram (famous for social science experiments about authoritarianism) was completely right; that people want authority figures to tell them what to do. Machines delivering certainty might make it more likely that people will fail to notice the damage their decisions do.