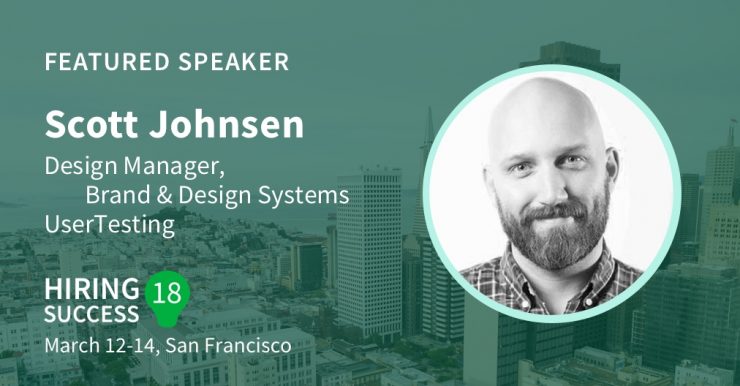 When hiring for something subjective like design, things can be a bit trickier than usual. And so before regaling us with wisdom at Hiring Success 18, we caught up with a guy who makes these kinds of tough calls all the time, and makes them well.

Scott Johnsen is a Product and Design Manager at UserTesting, tasked with developing and deploying a cohesive system to align their marketing, product, and engineering around a visual language that resonates with customers.

Scott owes his uncanny ability to build teams and systems – previously at Nerdwallet and Delivery Agent – to his early career in the fire service, where the necessity to motivate and operate as a unit was paramount to survival. He attributes being hard-wired for empathy as his greatest asset, enabling him to understand his users better, and for building teams that thrive.

What does the concept of Hiring Success mean to you?

Hiring success is finding the right candidate who meets three criteria. First, there’s Skill: Identify the person who matches the organization based on their resume, portfolio, and application documentation. Next, test and measure to gauge their Will: the passion to work under pressure, problem-solve and execute in a time-controlled, pressure-induced environment. Most importantly, there’s Fit: How well does this person work with a team? Are they collaborative, open to feedback, able to lead when needed, are they coachable, open to growth and continued learning? This formula has enabled me to work with bright, talented, and dedicated people, who may have otherwise been rejected on subjective analysis or rated on arbitrary criteria. Skill, Will, and Fit is the foundation for Hiring Success.

Where on a CEO’s list of priorities should recruitment be?

At the very top. Every hire is critical, regardless of the operational level of the position. To put it plainly, culture is the sum of its parts. Every single person brought into the company plays a role in upholding the ethos that drives the company. Recruitment is the function that operationalizes that endeavor, so a significant amount of thought and effort must go into identifying the right candidates and setting them up for success in the company.

What do you think will be the defining feature of recruitment in five years?

Whether employers will get it. In other words, it’s not just about finding the right candidate. It’s about finding the right candidate AND fulfilling your end of the employment bargain – positioning them for success, mentoring your hires, helping them develop. When hiring truly becomes a two-way street, it’s about continually growing and developing, too.

When hiring designers, what are the most important elements to get right?

We put our best foot forward at all times, regardless of whether the candidate is an active or passive hire. Every interaction is a touchpoint and every touchpoint communicates something to them – and hopefully, it’s a positive communication. We want every candidate leaving the interview thinking, ‘in addition to being a great role with opportunity, I just really want to work with this team.’

What tools have you found are invaluable in hiring an effective team?

Converse: I learn way more by sitting down and having a chat with a candidate than I ever could regurgitating stale interview questions. This enables me the greatest insight into who this person and if they feel they would fit well with our team.

Care: Seriously, just give a damn about the candidate sitting in front of you. Who are they? What drives them? Where did they come from? This is the first interaction of thousands, it’s imperative that I show up, be present and attempt to convey a key component of my team’s nature – caring deeply. If you truly care about your team, most everything else will fall into place. You will move mountains for them and they will do the same for you.

Calibrate: Speaking more tactically, every participant in the hiring panel needs to be on the same page. It is critical that these people meet to identify the purpose of the hire, why this candidate was moved forward, assigning roles for the interviewers and reviewing portfolio. Again, by this point, by the time the candidate is onsite, I am less concerned with skill and will, I am mostly evaluating for fit. By aligning in the calibration meeting, we can more narrowly focus on the right things in the short time frames we have with them.

You were a firefighter for many years. How does this experience inform your recruitment approach?

In addition to the framework mentioned above, there is one critically important and core soft skill I use throughout every phase of the hiring process – empathy. When we would respond to an incident, whether a structure fire, vehicle accident, or medical aid – it’s essentially one of the worst days of these peoples’ lives. So, as a first responder, we are experiencing everyone’s worst day with them, every day. There tend to be basic responses: you either learn to shut it out, or you embrace it and deal with it. I like to think I usually went with the latter.