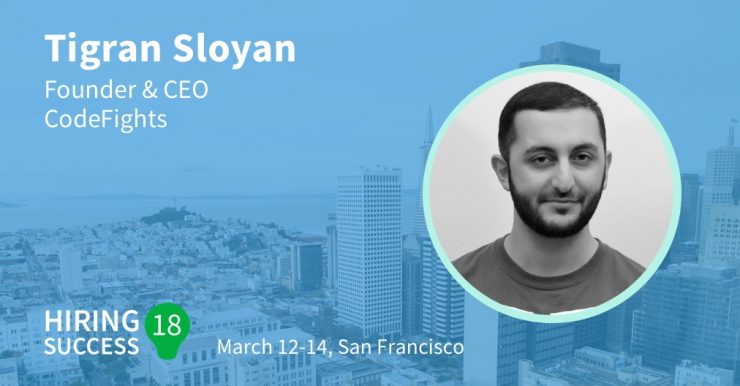 So you’re looking to hire a coder. You’ve read their resume, looked over previous projects they’ve worked on and chatted to them in an interview. Everything checks out but there’s still one lingering question. Can they actually code well?

Traditional recruitment concepts are not particularly conducive to figuring out this most important question. Sure, you could assign them a task or have them come in to work for a day, but both of these options are laborious, time consuming and not easy to scale. If only there was some kind of testing level you could build into your hiring process?

Well, now there is, thanks to upcoming Hiring Success 18 speaker Tigran Sloyan, the co-founder and CEO of San Francisco-based technology startup, CodeFights.

At its core, CodeFights is a tool which both aspiring and veteran developers can use to build and hone their skills through fun, addictive coding games. However, it is also much more than that. Through completing challenges and games, coders can also be put into contact with jobs which match their skill level. As well acting as a more accurate barometer for coding prowess, a testing process such as this also helps eliminate bias and allow inexperienced, grassroots talent to get a foot in the door of a competitive industry. In an article with CioDive, Sloyan explained the advantages of the CodeFights system:

“It eliminates the need to try to guess who might be interested in a new job and, most importantly for recruiters, to try to avoid assessing people based on pedigree. We’ve pre-assessed their skills and abilities. We’ve helped them get better, and now all [recruiters] have to do is convince those people to join their company. We can become a lot more efficient match maker when we have data and not just self-reported job descriptions or resumes.”

And it seems both developers and companies are taking note. Since its launch in September 2014, CodeFights has attracted over one million developers from 200 countries and over $12.5 million in investments from some of Silicon Valley’s most prominent financiers.

If this concept has piqued your interest, then it’s essential you get down to SmartRecruiters’ Hiring Success 18 to catch Sloyan’s presentation, ‘Measuring Talent’.  As well as defining a nosier, post-resume recruitment world, Sloyan will provide his unique insights into implementing a data-driven, design layer at the top of your hiring process.

So if you want to revolutionize the way you hire developers, join SmartRecruiters and Tigran Sloyan at Hiring Success 18, March 12-14 in San Francisco. Register here, and check out who else you can expect to see on our confirmed speaker round-up.