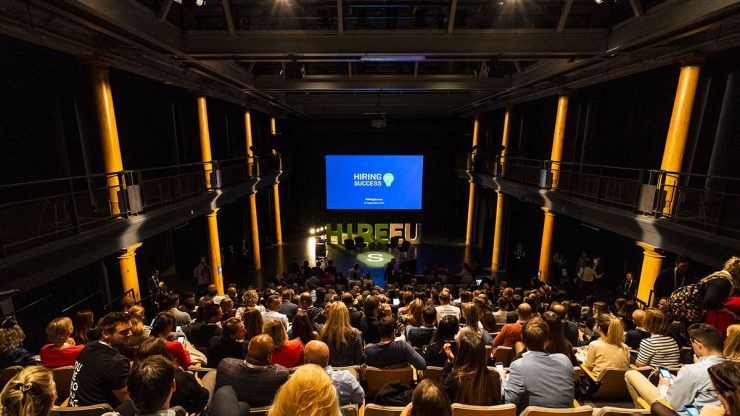 Highlights from day one at SmartRecruiters’ annual EU conference on all things recruitment.

In the heart of Amsterdam, along the Kloveniersburgwal canal, lies the Compagnietheater— a former Lutheran church that now serves as an event location. The Baroque-era venue still lends itself to mass congregation, albeit it under different circumstances, and it’s here that talent acquisition executives, thought leaders, technologists, and investors from 31 countries have gathered to discuss the state of the recruitment industry, as well as the shape of things to come.

Over four hundred attendees from across the world have come to the Dutch capital to network, participate in workshops, view product demos, and attend lectures from a diverse cross-section of industry experts. The venue is outfitted by accessibility experts to accommodate guests of any visible and invisible disability, including translators and a sign language-encouraged coffee bar! A key ingredient of Hiring Success conferences, the sessions touch on a variety of workplace-related topics that are significant for talent acquisition professionals. Topics range from the latest technology & process innovations to diversity & inclusion, and—of course—Hiring Success.

It would be impossible to account for the total Hiring Success EU experience in a blog post. That’s a pleasure reserved for attendees. However, here are a few highlights from day one. And to those who couldn’t join us this year, we hope to greet you in person in 2020.

The CEO of SmartRecruiters, Jerome Ternynck—affectionately known as the chief Smartian—set the Hiring Success festivities into motion on a personal note.

“Some people believe their calling is to cure illness, for others it’s to find a way to get to the moon—for me, I’ve always believed that my calling is to help connect people to jobs at scale,” he announced to an audience of over four hundred talent acquisition practitioners and professionals. And, as anyone with recruiting experience knows, that’s no small feat.

The modern labor market is multi-faceted and more complex than ever. Among other things, globalization, remote work, the rise of the gig economy, and an increased demand for highly-skilled workers have made it increasingly difficult for recruiters and the companies that they work for to source the talent they need to succeed. This is a daunting reality not only for Ternynck, but the majority of executives.

According to Ternynck, 77 percent of CEOs see hiring for key skills as the biggest threat to their businesses, and 82 percent of Fortune 500 companies don’t believe they’re in a position to recruit highly talented candidates. Given that by 2030, there will be a global human talent shortage of more than 85 million people, it’s not hard to see why this sentiment is so common among executives.

What, then, is the solution for this discrepancy in workforce supply and demand? For Ternynck, the answer to that question is clear: applying the guiding principles of Hiring Success to talent acquisition. In a nutshell, that’s accomplished by doing the following:

In closing, SmartRecruiters’ CEO implored guests to take a non-traditional approach to connecting candidates to jobs by giving back and participating in Reverse Recruiting. Now adopted by over 50 major companies including Tesla, Twitter, and Visa, Reverse Recruiting is a program in which organizations help overlooked and/or marginalized jobseekers find employment.

For many job seekers, there’s one unfortunate obstacle that stands between them and their ability to secure employment: bias. For some, like former convicts, this bias is systemic and concretely difficult to circumnavigate. For others, it’s more subtle and harder to identify. An example would be victims of ageism or disablism. No matter the source of the bias, it excludes from the workforce countless individuals across the globe that are well-qualified and well-intentioned.

This is an unnecessary loss for all parties involved.

Fortunately, there are a few progressive-minded companies and foundations that have taken it upon themselves to directly challenge this injustice by championing a concept known as Open Hiring, the belief that people should be allowed to decide if they’re able to perform a job—not someone else’s bias.

Ingeborg Zwolsman, Program Manager for the Start Foundation, made a persuasive case for the movement in her morning session “The Open Hiring Revolution.” The Start Foundation, an independent venture philanthropy fund based in Amsterdam, partners with local businesses that are willing to give jobs to candidates that are traditionally overlooked. The only prerequisite for employment is a willingness to work. There are no interviews, screening questions, or other such hurdles.

The Start Foundation takes their inspiration from Greyston Bakery, an American non-profit that pioneered the concept of Open Hiring to create over 3,500 jobs and pay out over $65 million in salaries to employees that previously struggled to find work. Greyston Bakery was thrust into the public eye after Ben & Jerry’s, impressed with their mission, decided to source the brownies for their ice cream from the non-profit.

Let’s Debate the Future of Work

As SmartRecruiters’ CEO Jerome Ternynck mentioned in his opening statement, the labor market is now more complex than ever. Phenomena like automation and a spike in the gig economy have complicated our traditional notions of the workplace. How recruiters and employers adapt and prepare for similar changes in the future is a point of contention.

To gather insight into the future of work, we invited Karen Rivoire (IKEA) and Kevin Wheeler  (The Future of Talent) to an Oxford Union-style debate hosted by Hung Lee, co-founder and CEO of Workshape.io. Rivoire and Wheeler both ran global TA and HR organizations, and have dealt firsthand with the aforementioned issues at scale.

Prompts for the debate were fielded from the audience, three of which were shortlisted:

The questions, voted upon by the audience, seemed to convey a collective sense of unease about the ever-changing nature of the labor market and the implications that has for the recruiting industry as a whole.

Rivoire seemed to share the audience’s apprehension and called for a tempered, cautious response to transformations in the workplace, particularly with concern to automation and artificial intelligence. Wheeler, on the other hand, unflinchingly argued in favor of adopting technologies like AI to counter human bias. Though they held contradictory opinions, both participants comported themselves judiciously and in a manner befitting of democratic, spirited debate.

Though the debate was cut short due to scheduling constraints, it underscored the complexity of issues that talent acquisition professionals encounter and, consequently, why it’s essential for employers to invest in highly skilled recruiters.

If Ternynck justified why Hiring Success must be a top priority for today’s business leaders, then Rebecca Carr, SVP of Success at SmartRecruiters, painted a clear path for attendees on how they can attain it. Armed with a methodology consisting of business assessments, maturity model frameworks and pillars of investment areas, Carr outlined how talent acquisition leaders can evaluate, strategize, execute, and finally optimize current processes and skillsets to level up in performance across:

Using candidate sourcing as a sub-topic under the talent attraction & engagement pillar, Carr floated sample business assessment questions and live-polled the audience to calculate their maturity levels. It was a fitting way to wrap up day one, connecting the dots on how to invest in various areas of talent acquisition in order to drive business outcomes while connecting people to jobs at scale.

Check back tomorrow for a recap of day two at #hireEU 2019, and join the conversation on Twitter and LinkedIn Live.