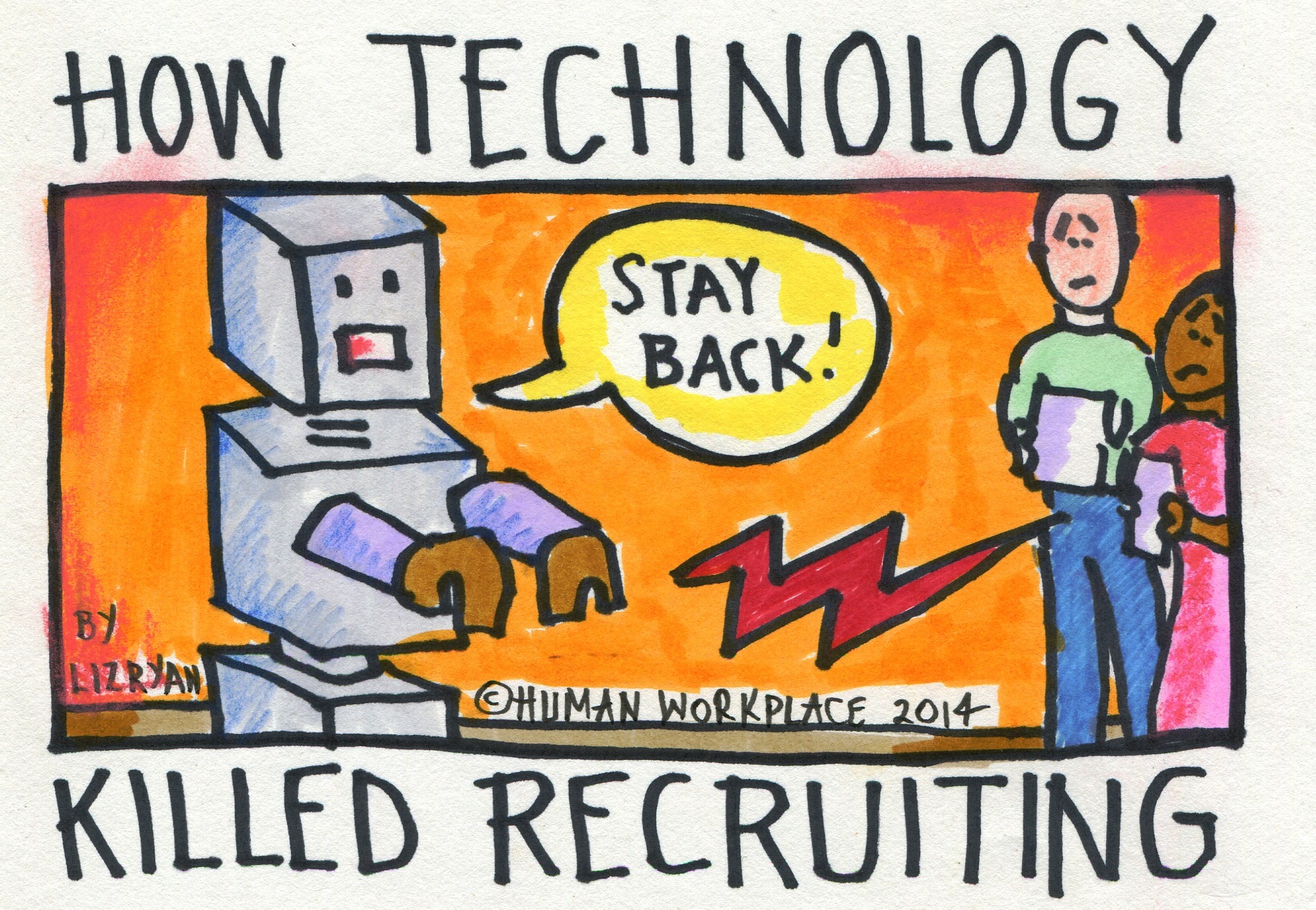 I turned 54 a couple of weeks ago. That makes me more than old enough to remember the frenzy to automate virtually every business process in the nineteen-eighties and -nineties. What cracks me up thinking about those days is the mantra, repeated a hundred times a day: “Garbage in, garbage out.” Before you automated a process, every business analyst and programmer told us, it had to be a sensible process on its own.

If that were true — if we had really followed that wisdom — we wouldn’t have the mess that we have in recruiting today. We took a craptastic 1940s process, the job-application-screening process used by factories probably since Henry Ford was building Model Ts, and we simply threw the sucker online. We didn’t change a thing. If any of the vendors who built the first Applicant Tracking Systems had spent ten seconds thinking about that process, they would have designed it intelligently, using normal human logic to create a funnel that would simplify the process of separating wheat from chaff in the selection pipeline. That’s not what they did, though. 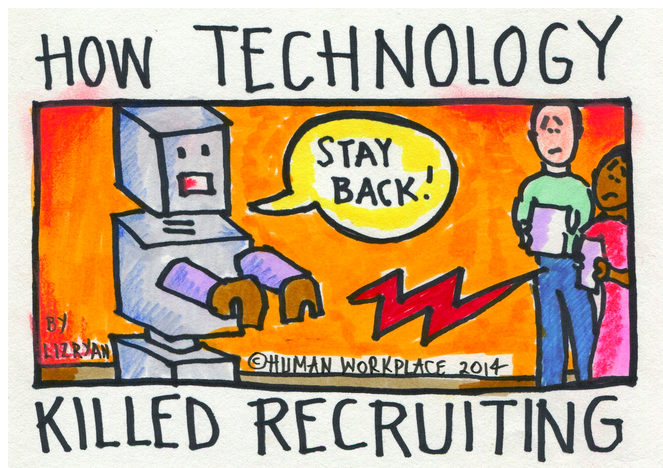 When you fill out an online job application, it asks you where you worked and for how long, and it asks for your job title. Any reasonable person can extrapolate your major duties from the job title, but every ATS I’ve ever seen goes ahead and asks for the tasks and duties you performed, anyway. Tasks and duties! It’s 2014, but you’re asked what tasks and duties you performed, as though the list of items in a job description is more important for your next employer to understand than what you actually accomplished on the job.

A friend of mine is an elementary-school principal. She got halfway through completing an online job application in a recent job search and gave up. “It’s so stupid, I couldn’t even finish it,” she said. “When the form asked me for my last position, I typed in ‘Principal.’ When the next field to complete was ‘Tasks and duties,’ I wanted to type in ‘Don’t you guys know?’”

If you think about the smartest, most switched-on person you’ve ever worked with, and then think about the biggest slacker and do-nothing person you’ve ever worked alongside, the contrast between those two people is obvious. Yet no ATS in the world could distinguish between them, as long as the two people worked at the same job in the same company at the same time. Applicant tracking systems don’t inquire about what you learned at a job, what you left in your wake or what you view as your greatest accomplishment. Our selection mechanism is stuck in 1940, interested only in the tasks and duties and tools you used, as though those things out of context could have any significance to your next boss at all.

It’s not just the choice of fields in Applicant Tracking Systems that makes them so loathsome, and I say that as a twenty-year corporate HR chief. They are built on bad logic at their core. They are based on the notion that the central problem in recruiting is to screen out and dismiss unsuitable candidates, making a business function (and an expensive one at that!) out of the vetting process, whereas in fact the problem in recruiting is that it’s hard to find great people, and we should be selling them throughout the process if we want them to consider joining us.

Ask any CEO how s/he feels about the availability of talent. It’s a global problem, and not only because job descriptions are so often fanciful-bordering-on-delusional. It’s hard to find employees who are not only smart and plucky but also good communicators, flexible and reliable. When you’re facing a shortage of talent — not job applicants, mind you, but the proactive and self-directed subset of those applicants who can make a difference for your firm and its customers — is your first thought “Let me make the job application process as off-putting as possible?” Not if you understand Thing One about human motivation, it’s not.

Any employer’s recruiting priority is to get great people into the talent pipeline and keep them there.

And what says “We love you!” more than forty pages of fields that must be filled in, boxes to check, and mind-numbing tedium just to fill out a job application?

When the terse auto-responder helpfully shoots back a snippy “Your application has been received (passive voice!) — if there is interest in your background for any position, we will let you know,”  talented job-seekers with other options — the very people we should be wooing with all our hearts – conclude that their bread is best buttered elsewhere, and bail. Can we blame them?

Applicant tracking systems are Black Holes for job-seekers. You lob a resume in, and nothing comes back. If you’re lucky enough to get a response, it’s likely to be a different (but still terse) auto-response demanding that you complete an aptitude test or an honesty test. The honesty tests employers use are actually intelligence tests, because if you’re not smart enough to figure out the ‘right’ answer on those things (“If you saw an employee stealing, what would you do?”) you’re not smart enough to have a job.

I’ve been in HR since 1984, and I have never seen the state of corporate and institutional recruiting at a lower point than where it is today. We treat job applicants like dogmeat at every stage of the process. We drive them away when we should be welcoming them into our corral. There’s no business justification for it, and our shareholders should be up in arms. Maybe they’ve drunk some of the same toxic lemonade that so many others have tasted, the kind that says “It can’t be helped — there are so many job applicants, we need a mechanical system to sort them all out.”

That’s a lie. We can market to talent as thoughtfully and narrowly as we market to customers. Marketers learn in a flash that when you market to the wrong people, it costs your company money in the qualification process. It doesn’t work differently in recruiting. We don’t have to blast our job openings out to the whole wide world, but we do, and then we complain that we can’t read all the resumes that come back to us. We can be smarter than that. We can evolve past Black Hole recruiting to treat each job-seeker like the valued collaborator he or she is. Our customers need us to figure out how, and so do our shareholders, and so do our communities.

The ATS vendors that will survive to 2020 and beyond will be the ones that figure out how to humanize the selection process. Luckily, it isn’t complicated. An ATS that were oriented toward engaging job-seekers rather than intimidating and repelling them would be a good start. Once we make contact with a job-seeker, that contact should be human.

It isn’t complicated to do, but it takes a shift in perspective. In the mid-nineties without benefit of ATS technology (which is nothing more than big, dumb database technology anyway) we hired two or three hundred people a month without difficulty in our growing tech firm. Any organization can do the same thing, but in order to humanize a recruiting process you first have to think like a human.

Every hiring manager and every HR or Recruiting person should be cultivating their networks all the time. Recruiting isn’t an event, but a process that never stops. We’ve tried so hard to make particles out of waves in the business world, and the way we recruit new employees is a perfect example. If we can just evolve past the ridiculous way we hire people now — screening resumes, for instance, on the basis of obviously irrelevant job-spec bullet points — it can only be good for us.

A CTO said to me “I have three openings on my team. I need a software architect, a manager of hardware design and a project manager. Since I have three openings, I can be flexible — but not according to our company’s policy.” “How so?” I asked him. “Well, I could hire a stronger hardware manager, for instance, and get a project manager with a little less experience. If I got a very senior software guy, then the other two positions could flex toward someone a little more green. But the job requisition system requires me to know exactly how many years of experience each new hire needs to have, and exactly what I’m going to pay each one. That’s stupid! Hiring happens in context, like everything else in business.”

We have a lot of work to do to humanize recruiting, and that’s not just for the benefit of the people being recruited. It’s simply good business to get out of the hyper-mechanical world we so love to inhabit at work, and bring recruiting back into the squishy, juicy, warm and human realm where it belongs.

This article was written by Liz Ryan from Forbes and was legally licensed through the NewsCred publisher network. Learn more about SmartRecruiters, the only platform managers and candidates love.