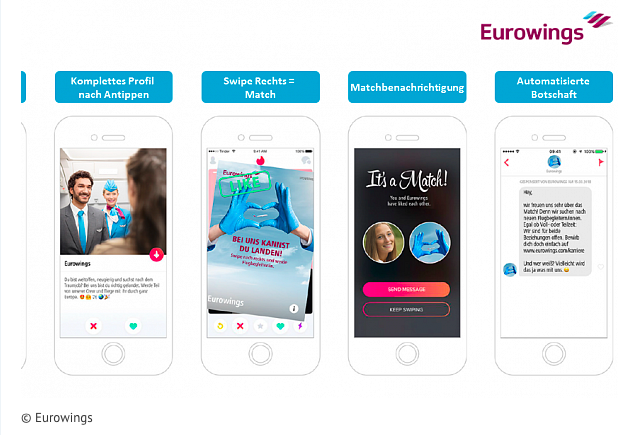 In Europe, Launch Tinder to Join the New Mile-High Club

Using tech creatively in recruiting is more than de rigueur, it’s the new standard. But for one German airline, there is still another horizon: right swiping.

It’s Friday. It’s almost quitting time. You don’t have plans. Your phone is in your hand, thumb twitching from an entire 30 seconds of non-use. If you’re one of the 10 million daily active users on Tinder, you may get to swiping on strangers’ faces, based on your synaptic speed of gauging beauty, brains, or compatibility of body parts. This evermore popular and socially acceptable behavior might land you a drink, a date, maybe more; but before today, you’d never think it could get you a job.

Not that kind of job. You perv. Starting this week, a German airline has taken a novel approach to recruitment by creating their very own Tinder profile, in hopes of landing candidates for various positions, both in and out of the cockpit.

Just as Facebook has always used your digital footprint to sell you targeted ads, Tinder has been dealing paid-for product profiles for a while now – you’re seeing the same products you shopped on Amazon yesterday because you registered with your Facebook account, remember? – but as for matching with a corporation and having them message you about job openings and link you to their careers page, that’s a new thing.

“Using a mobile online platform like Tinder to reach additional applicants is digital, modern, up-to-date and maybe a bit tongue in cheek – these attributes are in line with Eurowings,” said CEO Michael Knitter.

A budget subsidiary of national carrier Lufthansa, Eurowings was likely considered lower-profile, thus lower risk than the German mothership to engage in this kind of experimental recruiting. Or maybe it has something to do with Eurowings being a domestic entity, in geography and society where “European” attitudes to sex make this kind of hybrid app experience more acceptable? Imagine if United or American Airlines got the way of your San Francisco booty call. That might be bad PR for airlines that can’t afford much more of it.

At this point, it’s all speculation (the initiative is only three days old). If it fails, Eurowings Tinder will just be another left swipe, considered for a moment and dismissed forever. But if it works, in the same way people who once wouldn’t confess to, but now flaunt, their dating-app notch tally, “Hey I got a job off Tinder” could be a new twist on an old taboo. Maybe in a year it’ll be a point of pride. Because like going on an actual date after a Tinder match, you still have to get through the interview, at which, unlike a date, there won’t likely be any booze to help you.