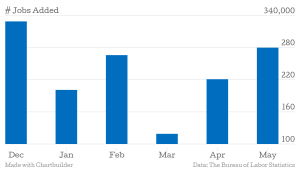 Employers added 280,000 jobs in May, according to the latest jobs report out from the Bureau of Labor Statistic Friday morning. Economists were forecasting an addition of 225,000 jobs. The unemployment rate, which is drawn from a different survey, came in at 5.5% up slightly from 5.4% in April.

Employers added 280,000 jobs in May, according to the latest jobs report out from the Bureau of Labor Statistic Friday morning. Economists were forecasting an addition of 225,000 jobs. The unemployment rate, which is drawn from a different survey, came in at 5.5% up slightly from 5.4% in April.

The payroll count for March was revised up to 119,000 from the latest reading of 85,000. This is the second revision to the March reading which initially came in at 126,000 — already disappointing. April’s figure was revised down to 221,000 from 223,000. Net total employment gains in March and April were therefore 32,000 higher than BLS previously reported. In the prior 12 months an average of 251,000 jobs were added and Friday’s reading pushed the year-to-date average to 217,000.

“Today’s report shoes that the labor market sill has a lot of momentum,” said Glassdoor Chief Economist Dr. Andrew Chamberlain. “All the factors that sparked weak jobs numbers for March were temporary. A late winter sniffle rather than a lingering illness.” Chamberlain went as far as to say that if you visited the U.S. from another planet right now and took a broad view of the labor market you would have to conclude that things are pretty good right now. Of the 563,000 discouraged workers in May — people not currently looking for work because they don’t believe jobs are available for them — he asks, “If you’re not getting back in now when are you going to? This is as good as it ever gets.”

To be sure the number of discouraged works has dropped substantially, down by 134,000 from a year ago. The labor force participation rate was little changed at 62.9%, this rate has been remained in a narrow 62.7% to 62.9% range since last April. But the employment-population ratio was up slightly to 59.4%. Robin Anderson, senior economist at $331 billion assets under management Principal Global Investors, pointed out this number doesn’t move very often so it is meaningful when it does.

Currently 8.7 million Americans are unemployed. At issue for months, however, has been the large percentage of people who are working part-time not by choice but because they had not better option. The U-6 rate, which measures under-employment, came in at 10.8% in May unchanged from a month earlier and 12.1% a year earlier. This accounts for about 6.7 million workers.

Wages have also been a lingering issue for both economists and discouraged workers. In May average hourly earnings rose by 8 cents to $24.96. The 12-month wage growth rate ticked up to 2.3%. Pre-crisis annual wage growth was north of 3% but economists view this latest bump as a move in the right direction. Plus, with major employers like Wal-Mart Stores, McDonald’s and Target raising the minimum wage for their workers many anticipate a further bump to this figure.

Chamberlin pointed to Glassdoor data showing high demand for workers from tech, professional services, health care and hospitality businesses. These industries are seeing some wage growth. When there is an in balance of supply and demand employers need to offer slightly better wages. These are not coincidentally the sectors that added the most jobs last month: business services (plus 63,000), leisure and hospitality (57,000) and health care (47,000). Employment in mining fell for the fifth month is a row with 17,000 jobs lost mostly in support activities. Mining employment has declined by 68,000 this year thanks to lower oil price. These are also sectors that are seeing stagnant wages.

Perc Pineda, senior economist of Credit Union National Association, notes that wage growth will need to continue to sustain economic growth especially as new college graduates enter the workforce. “We have added 3 million Americans into the labor market but most burdened with student debt,” he says. Since debt repayments to not contribute to output that major expense is not factored into GDP calculations. New grads therefore will need higher wages in order to fully participate in the economy by spending rather than just paying down debt.

In the first 30 minutes following the release stock futures sand into negative territory. The S&P 500, Dow Jones Industrial Average and Nasdaq Composite were each down about 0.3%. The yield on the ten year Treasure note was up as high as 2.43%. BLS — a division of the Department of Labor — will report June jobs numbers on Thursday, July 2 at 8:30 a.m.

Wednesday, payroll giant ADP said that private employers added 201,000 jobs last month. This was slightly above economists’ consensus estimate and the first month in three that the reading — considered a loose indicator for the BLS report — came in above 200,000, a level it consistently hit or exceeded in the second half of 2014 and early months of 2015.

Mark Zandi, chief economist of Moody’s Analytics (which works with ADP on the report), said at the time, “The job market posted a solid gain in May. Employment growth remains near the average of the past couple of years. At the current pace of job growth the economy will be back to full employment by this time next year. The only blemishes are the decline in mining jobs due to the collapse in oil prices and the decline in manufacturing due to the strong dollar.”

This article was written by Samantha Sharf from Forbes and was legally licensed through the NewsCred publisher network. SmartRecruiters is the hiring success platform to find and hire great people.