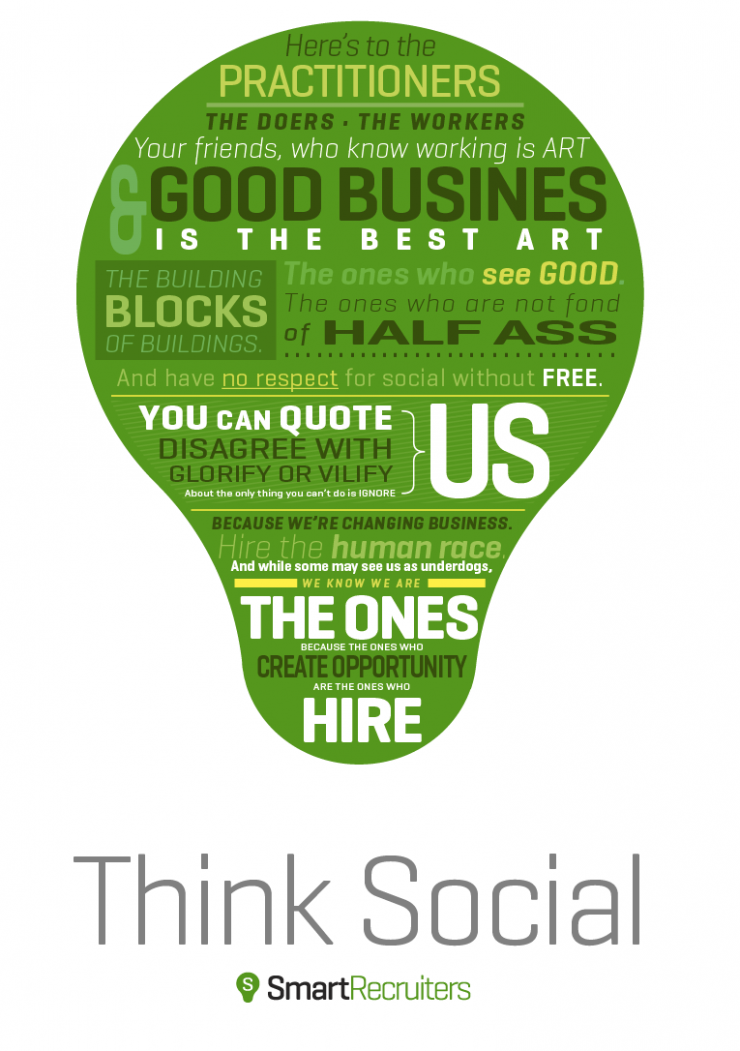 “We need to bring recruiting back to its roots as a social activity,” said SmartRecruiters CEO Jerome Ternynck.

I’ve updated the crowdsourced social recruiting definitions, and then added a few of the internet’s most respected definitions:

Matt Alder, Strategy Consultant for HR and Founder of MetaShift

“Taking a “social” approach to recruiting on and off line. It;s not technology, its more talk to than apply for.”

“Social Recruiting is when companies and recruiters use Facebook, LinkedIn, Twitter and other social media sites to source and recruit candidates for employment.”

“Social recruiting is about defining your employer brand that gives employees reasons to pursue their career with you. It’s not poaching staff, it’s not about mass-hires, it’s about jobs and livelihoods with your company, and that message is delivered through contemporary social ideals and methods that reach real people.”

“Some people criticize the term social recruiting when used to mean using social media to source job candidates, and say that recruitment that’s truly social needs to be conducted within a purpose-built social network rather than what are essentially public forums.”

“Social Recruiting is not simple. It means maintaining a fresh, authentic and accessible employer brand message on 3 major channels; Social Media, Search Engines and the Mobile web. Whether we like it or not society is moving quickly toward a digital, social, on-demand reality. The people we’re trying to “Recruit Socially” expect us to share only the best information with them on their favorite channel. They expect us to be ready for THEM when THEY are ready to engage us. That could mean someone is ready to apply to a job from our Facebook fan page on their iPhone. Social Recruiting is not an endless Twitter feed of job links and instructions to go to our ‘website or ‘this job board’ to browse and apply to our jobs.”

I find that as a hyper-active social media user, I meet many people from different geographic locations and different business backgrounds. I do find that it is a lot easier to get recommendations (and give them) via Twitter and Facebook, even though the predominant recruiting network continues to be LinkedIn. I also find a number of experts by the answers they give on Quora. My favorite example of “social recruiting,” though, is the sheer randomness with which a Louisville, KY CFO made a hiring decision based on a chain of events set in motion by a single tweet that I made in 2008. Here’s the story, it’s a good one.

Dave Lee, Brand Builder for Amazon and US Army

In 2007 as I was taking over the Army Strong campaign for recruiting I began to look at the value of using social media to communicate the value of being a Soldier. Based on my experience I take Social Recruiting to be more than the use of tools (Facebook, Twitter, LinkedIn, etc) to aid in the recruiting effort. Social recruiting is about connecting candidates with your employers. Its about providing a chance to learn about your culture. We did this in many ways, video responses from Soldiers in Iraq, a website filled with blogs from now almost 800 Soldiers as well as connections on Facebook, Twitter, etc. More about the program can be found on my blog http://DavidALee.com.

Social Recruiting is more than sourcing candidates and advertising career opportunities on Facebook or Twitter. It’s about being present and active in a space lends itself to conversation, feedback and the sharing of information between an organization, job seekers and even consumers. You never know which customers today will be candidates tomorrow.

“One must identify, follow, share, and contribute to grow relationships, build rapport, and woo the top talent to your organization.”

“Social recruiting is an ecosystem of discovered and deliberate encounters. Interactions that lead to employment are those where organizational identity aligns with individual stories. Social media is where these narratives are both written and rewarded.

“Social Recruiting is the future of recruiting. I had a candid conversation with a recruiter friend of mine last week who works for one of the largest recruiting firms in the country. Many of these firms are stuck in the past and don’t want to embrace the concept of social recruiting and the fact that it is getting ready to run them over.”

“It is a proactive process for job seekers and recruiters to search, converse, share, engage and refer each other using social media, web-based and mobile platforms.”

“We would define Social Recruiting as being behaviour that encourages free and willing dialogue between both parties in the hiring equation: that’s to say between candidates and recruiters.

This is the equivalent in the connected world of a careers fair. Any candidate coming into the fair can choose to go and talk to any recruiter at the fair – and through discussion they will mutually decide whether there is a good basis for progressing hiring discussions further. In this sense Social Recruiting is highly inclusive.

This is quite distinct from traditional recruitment. Prior to Social Recruiting, all forms of recruiting activity had gatekeepers that would act as barriers to conversation taking place”

Social Recruiting to me is the ability to use all the tools at your disposal to create, develop, nurture and watch relationships grow between client and candidate. It is also the ability to find the right people at the right time for the right situation. Timing is key and taking the time to nurture the relationship is one of many keys to success. Thanks for asking for my opinion.

“Things like “conversations” or transparency or “free and willing dialogue between 2 parties” are all things that good recruiters have been doing for decades. Facebook or Twitter are not required for any of these. In fact wouldn’t you agree that the phone or face to face are really where conversations happen? There isn’t much meaning in the term Social Recruiting.”

“It’s the process of extending our recruitment strategy to the social media so we can recruit not only the active job seekers, but also the passive ones.”

“I find it very useful to see how different and how common, in the same time, are all definitions of Social Recruiting. I think that we are facing a higher focus on Human than on Resources, making better sense of the need to relate at a more profound level to organizations or individuals, with the support of Social Media channels which increased the visibility of people and/or their interests (making thus sourcing &connecting easier)! But beyond that, I find that face to face interactions and relationship building abilities are still very valuable for the success of the recruitment projects.”

“Social recruiting is when job seekers and recruiters use social networks to connect, educated and inspire people.”

“Social Recruiting is removing barriers to geography, companies and people by utilizing web communities to increase transparency about a company and/or its employment opportunities.”

“Social recruiting is just communicating with candidates, being accessible, transparent. Better than hiding behind curtain.”

Social Recruiting is the buzz. Is it more about sourcing talent? Engaging with people? Or assssing potential hires? We can be certain that it is evolving into something big. How do you see it – what’s social recruiting?