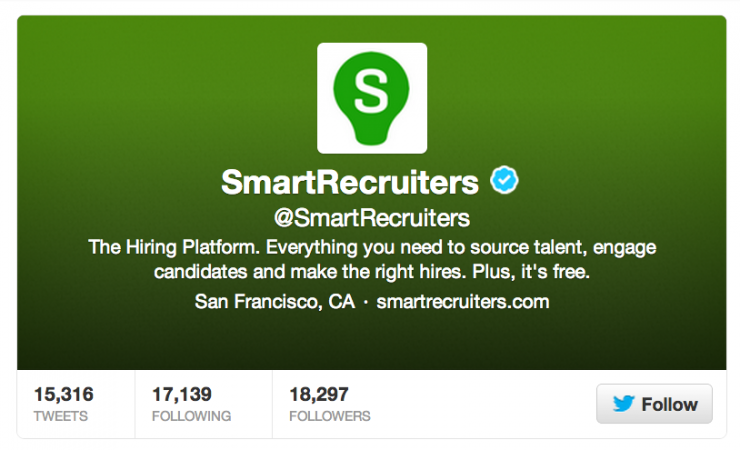 What a year at SmartRecruiters! Since the end of 2012 the team has grown from 30 to 55 people, the customer base from 30,000 to 60,000 companies, and we released a bunch of new products (agency management, candidate assessment, mobile recruiting, to name a few). Here’s what people are saying about this SaaS startup in 2013:

@SmartRecruiters I was very #impressed how #organized and neat it was. Not to mention, the free aspect. Glad to know it’s out there!

@SmartRecruiters best online application ever, real simplicity makes it so much more pleasant

Happy I finally got to see where the magic happens at @SmartRecruiters! Thanks for a great discussion @fishdogs, @williamtincup, @JohnSumser

@SmartRecruiters Whatever the #interview process. Never exceed 2 weeks. Otherwise the best candidate is gone before you finish.

If YOU haven’t had the opportunity to check out @SmartRecruiters, do it! Nik and team are terrific and so is their FR…http://t.co/v3m9ysW5

@DavidSmooke I really like your business model. Nice, clean site! Thanks for the follow. #SaaS #recruiting #ATS

Check out @SmartRecruiters, the free recruiting platform that makes hiring easy. Really, it only took me a few mins! https://t.co/6MgKdPFk

@DavidSmooke BTW, I’m trying your software, seems interesting….I referred it to a few folks on the internal side…love the #UI

Learning about Quality of Hire via @SmartRecruiters Webinar right now.

Can relate 2 @jerometernynck saying personalize responses 2 applicants you turn down. He sent me 1 & I’m still a big fan of @SmartRecruiters

Some companies in the #siliconvalley I love and who do awesome stuff: @SmartRecruiters @eventbrite @square @Twitter. What about you? #tech

@DavidSmooke Redesigning my sisters website and switching her over to smartrecruiters. You guys have a great tool here!

So happy I won the @SmartRecruiters instagram contest!!!! Yeeeiii!! Thanks!!!

Oh my god, I almost want to cry when it’s so easy to apply for a job! @SmartRecruiters https://t.co/d3ic6ZXwie

Thanks @SmartRecruiters for my package! pic.twitter.com/lCFh5fnB8v

LOVE #SmartRecruiters. Set up a client in a few hours to alleviate a huge pain point. Fantastic platfrom. #HRHappyHour

I tried out @SmartRecruiters today and really liked it. It’s a great ATS

These people get recruiting. HR’s Checklist for Hiring a Recruiting Agency http://t.co/9Xz7Cw3Ynh

Did my first-ever @SmartRecruiters posting today. Loved it. If you’re a #smallbiz or #nonprofit just posting jobs in html, make the switch!

This is how recruitment should be done. https://t.co/y5wUcpJbyU

I love the little thrill I get when I click “Create a Job” in the @SmartRecruiters interface. #recruiting

Another reason to travel? We’ll take it! See how travel experience can help you land your next job: http://t.co/iSiDsSVUQK

After applying for so many jobs, I’m happy to see that @SmartRecruiters really makes applying intelligently easy.

@SmartRecruiters So impressed with you guys lately – keep up the good work!

From their Web sight, totally clear SLA from @SmartRecruiters https://t.co/Npplx7uN5r

The Onion is currently hiring a Listening Intern for its Chicago office: http://t.co/E8NuIhoOca

Apply to be a Listening Intern for ‘The Onion’ http://t.co/RPcRIdNvMV

A3 Social Media can make the application process so much simpler. Think @SmartRecruiters #nextchat #recruiting

Looking to #hire? Make your life easier and make the right hire with @smartrecruiters, a new start up located in SF. http://t.co/vMV3Ph9jXh

Why spend $$$ to attract candidates and then push them to “Please send your resume to [email protected]”? I just don’t get it

You will definitely love it @SmartRecruiters, the free recruiting platform that makes hiring easy. https://t.co/LnqEH1ftVK

@SmartRecruiters might just be the fastest, most user-friendly job submission tool on the Web. #HRgeniuses #5min https://t.co/t3YjDceFIa

Some companies applications are worse than being dragged on bed of nails while forced to listen to Beiber. Loved @SmartRecruiters‘ solution.

Is there a better hiring / recruiting blog than @smartrecruiters ? http://t.co/6O4XWOGdm4

@SmartRecruiters love the concept. I imagine you’d be making some people very nervous.

Recruiting starts as marketing and ends like sales — gotta be able to close the hire! #smartup #startupjungle via @smartrecruiters CEO

This is going to be fun! @SmartRecruiters secures Series B to disrupt the recruiting industry. http://t.co/ajJydTnV3B

I love to see the good guys win. Congrats to @jerometernynck and @SmartRecruiters on their latest capital round http://t.co/ULd1tgoVGL

You guys rock @jerometernynck @SmartRecruiters ! I’m sure these $ 10M are a good investment. You are a game-changer. #amazing #startup

So stoked for @SmartRecruiters‘s Series B funding. The best ATS out there, I’m excited to see where they go next! — Joe Hanson (@ToeJamson) August 22, 2013

A HUGE congrats to @SmartRecruiters for securing a $10 million Series B Financing round! Such a great company, growing so quickly! — Brandi Cole (@Brandi_Cole) August 22, 2013

@jerometernynck congrats on $10m fundraising. We are users of your wonderful product and plan to be heavy users in months and years to come! — Shazia Mustafa (@thirddoor) August 22, 2013

@jerometernynck @SmartRecruiters Congrats! This is great news for those looking to hire and be hired!

In honor of Labor Day, if you are a recent law grad looking for a job, I’ll review your résumé. #GiveLabor

Did you know 62% of jobs are posted to niche job sites? Are you missing out on these top boards? http://t.co/FEqUNtUIeY

Thanks @SmartRecruiters for following! #Free #recruiting software – you have me thinking of great ideas! Can’t wait to share this resource!

@SmartRecruiters it was such a great idea that I was happy to help. Heck, I might make a regular monthly practice of it. #coachinglawyers

I was a participant in the #givelabor intiative @SmartRecruiters. Do your part and help at least 1 of the 11.7 million unemployed find work.

@jerometernynck @SmartRecruiters Thank you for caring as much about job seekers as employers with #GiveLabor!

@jerometernynck @SmartRecruiters @BizDevBen Posting to all in one click — seamlessly awesome experience (no surprise there)!

@JohnSumser @Maksim And a smart and good man. Definitely gets true #SaaS #InFullBloom.

Social Media is transforming hiring/recruiting. @datasift hosted a meet up this week for @socialdataweek about it: http://t.co/B5bvqWHGsW — Rob Bailey (@RMB) September 18, 2013

Hey @SmartRecruiters, do you guys have a PS team that can help with a migration from Taleo? Time to make a move… — Staff IT (@staffitsearch) September 20, 2013

This is an excellent service! Smart. Easy. Painless. Everything recruitment should be. 5 stars. @SmartRecruiters http://t.co/FGA7helyaW — Delon le Roux (@According2Dd) September 23, 2013

Love this > “Attitude can’t be taught, but skills can, and people buy from people they like and trust!” via @smartrecruiters

I just found the most amazing job listing ever on @SmartRecruiters https://t.co/FEwC1ezefI — Mike Schwab (@schwabsauce) October 11, 2013

@SmartRecruiters, where have you been all my life? It has dramatically improved our recruiting efforts

@andrewplato @SmartRecruiters I agree with you.

@SmartRecruiters Hired 10 EEs the past 2 months & only have a few more to reach goal. Great software. When I show it to people they love it! — Adam C. Dennis (@adamcdennis) October 16, 2013

@SmartRecruiters thanks for the registration and the support. Yes, I registered & I look forward to shaking your hand. — Jon-Pierre (@EsqueJon) October 18, 2013

Nice! @SmartRecruiters rolled out their #mobile #recruiting platform. Sweet, straight forward and free, just how I like it. — Frank Zupan (@FrankZupan) October 23, 2013

Why employment branding is the future of recruiting http://t.co/wAR0BCANZT — CAREEREALISM (@CAREEREALISM) October 31, 2013

Thanks @SmartRecruiters for another great article! — Jennifer Brown (@RCSrecruiter) November 15, 2013

@SmartRecruiters I just applied to a position through your service. I have to say it was the easiest apply I ever did. Very smooth and easy. — Cherise Denise (@cherisederandle) November 25, 2013

The difference between a good hire and a great one? Your career. — Jerome Ternynck (@jerometernynck) December 7, 2013

@SmartRecruiters – just letting you know @DiegoAlamir was a rockstar helping me out. Thanks so much! — Lianne Gong (@liannegong) December 10, 2013

You know you love recruiting when an email from @SmartRecruiters saying you’ve been selected to beta test sourcing analytics gets you jazzed — Kimberly Sullivan (@CLEvival) December 17, 2013

@APPSRUNTHEWORLD One strong competitor in this space is @SmartRecruiters, which has real momentum and an interesting biz model. — Naomi Bloom (@InFullBloomUS) December 18, 2013

Who is the marketing and branding behind genius @SmartRecruiters? Its retarded how good they are at branding and now hitting up @sfnewtech ? 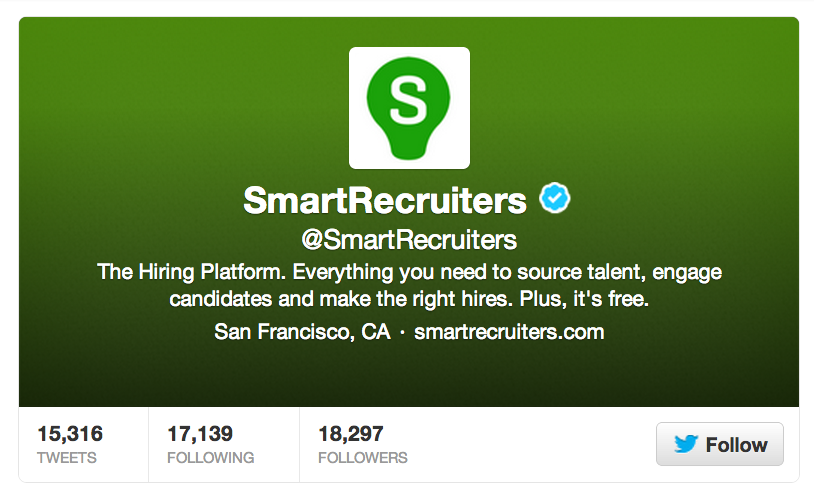