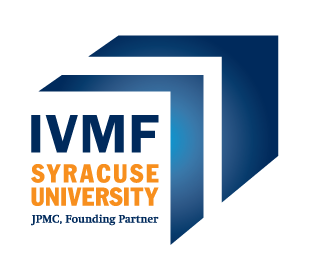 “Veterans facing unemployment have a much different experience than the civilian population,” says Dr. Mike Haynie, Veteran, Executive Director and Founder of Institute for Military Families and Veterans (IVMF) at Syracuse University. “It’s unique in a way most people do not understand.”

Dr. Mike Haynie served for 14 years as an officer in the U.S. Air Force. He was a professor of management at the U.S. Air Force Academy in Colorado Springs before becoming a faculty member of Syracuse. Haynie explained, “Syracuse has a long history of supporting veterans. After World War II Syracuse opened its doors to veterans with a program that admitted each military personnel to Syracuse after their return from war.” This more than doubled the student population. Syracuse had the largest military population in all of New York, and one of the highest in the nation. After learning of this long-standing tradition of supporting veterans, Haynie’s arrival and efforts to help veterans gain employment seem serendipitous.

No one will argue that yesterday and today’s soldiers are not heroes. We all know this to be true. We honor them for their service, their commitment and their hard work. So why is it, despite their status as heroes it is so hard for veterans to enter the workforce? Dr. Mike Haynie saw this problem of unemployment among veterans and spearheaded efforts to change the norm. In an interview with me, Dr. Haynie explained why hiring a soldier is essential to rebuilding our economy, can grow your business and how the Institute for Veterans and Military Families is bridging the employment gap for veterans. Shortly after arriving at Syracuse University Dr. Haynie founded the Entrepreneurship Boot Camp for Veterans (EBV) with Disabilities.”I was teaching entrepreneurship and management, and I figured I should be entrepreneurial myself.” Haynie was ready to help veterans.

Haynie saw a lack of training, educational, and entrepreneurial availabilities open to veterans. Understanding that this was a unique population he developed courses that cater specifically to veterans, such as self employment courses, vocational training, and transition classes. Over 500 veterans have received EBV training since 2007, and EBVs are now implemented in multiple schools across the country.

“We call them the post 9-11 generation. We saw veterans transitioning into civilian life with an unprecedented rate of war related disabilities, conservatively around 30%. That’s when it hit me,” says Mike Haynie.

As the EBV program continued to evolve and grow in popularity so did Dr. Haynie’s ideas, knowledge, and inspiration for helping soldiers gain employment. Dr. Haynie continued to develop programs for military entrepreneurship training and education, in 2011 the Institute for Veterans and Military Families at Syracuse became the first institute of its kind in the nation, an accredited university established specifically for veterans and their families. Created, “in service to those who have served,” IVMF focuses of diminishing challenges to the veterans’ community through programs, research, and education. Less than 25% of veterans over the age of 25 have a bachelor’s degree, but IVMF provides an opportunity to change that by providing curriculum based on veterans needs and breaking down barriers to education veterans previously faced.

“The ultimate goal is to get to a place where employers understand the value of veterans in the workplace,” says Dr. Haynie. “We want to make it so all veterans and their families have access to programs that will give them the skills to either start their own businesses or become employed in the general workforce.”

The IVMF not only works with veterans and families but employers as well.

Haynie explained, “There’s a stigma against things like PTSD (Post-traumatic stress disorder) still, it’s certainly real but it’s definitely not a reason not to be hiring veterans.” In order to break down this stigma IVMF publishes handbooks, and offers trainings teaching employers how to recruit and work with veterans.

“People wanted data, as an academic my reaction was to find the research. It turns out there was tons out there making a case for veterans in the workplace but the problem is that no one reads it other than academics.” It was just a matter of making the information public and digestible. In March 2012, Haynie and the IVMF published “Business Case for Hiring a Veteran: Beyond the Clichés.” The paper outlines the scientific reason behind hiring veterans, explaining that hiring for some is mostly art, but with veterans it’s the science of hiring that will motivate US employers to hire.

Dr. Haynie asked me, “How often is it that you can hire someone who is ACTUALLY able to make decisions under pressure, and has the background to prove it?”

It is an all too unfortunate truth that we need to face; unemployment among veterans is too high. IVMF reports, “the average unemployment rate for female veterans was 11.1%, as compared to 7.1% for female non-veterans. For 2012, veterans ages 20-24 are unemployed at a rate 13% higher than their non-veteran, age group counterparts.” We are getting closer to finding solutions, and can only hope that employers continue to see the value in hiring in veterans. Dr. Haynie emphasized, veterans are entrepreneurial, have high levels of trust, work well in teams, have high levels of commitment, cross-cultural skills, have technical skills, can switch tasks skillfully, and are comfortable with change and diverse work settings. This employee meets all of your businesses’ needs, and as your business’ needs change, this employee can adapt.

So what’s the hold up in hiring? Haynie is hopeful, “I’ve seen more improvement in the past couple years than I ever have since I have been involved with this. I think things will continue to get better.”

SmartRecruiters is the hiring platform with everything you need to source talent, manage candidates, and make the right hire.