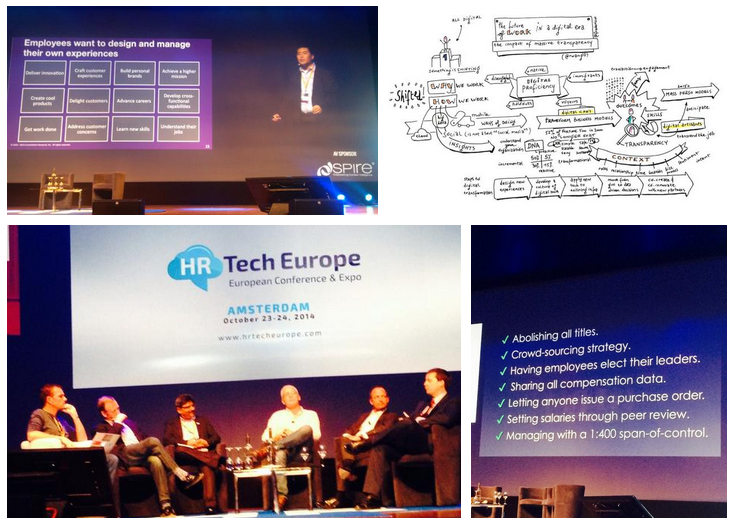 This is the moment after HR Tech Europe 2014; a walking podcast with TRU Founder Bill Boorman and eiTalent Head of Product Marc Mapes.

This is the moment after HR Tech Europe 2014; a walking podcast with TRU Founder Bill Boorman and eiTalent Head of Product Marc Mapes. Below you can listen to podcast or read the transcription in its entirety. But first, here’s what I see as the 3 most important HR Technology learnings from Bill Boorman:

1. The Globalization of HR Technology:

“80% of the vendors are the same (at HR Tech & HR Tech Europe)… smaller players are playing a global game rather than a domesticated game.”

2. Glassdoor’s Role in the Candidate Experience:

“I’ve seen it, I’ve found it, I’ve looked at it, let’s just double-check. Before I actually apply for this job let’s double-check. And that’s what I think Glassdoor is.”

3. To Prioritize the Building of Desktop vs. Mobile:

“I saw a number of vendors saying, “We’ve had to catch up the desktop experience because we haven’t really been concentrating on that for a period of time, because we’ve been focusing on mobile.” And that maybe says to you well, and we still have a lot of desktop users.”

David Smooke:        We just finished HR Tech Europe. We’re walking down the street to the pub.

David Smooke:        In the rain. So we’re really dedicated to podcasts. We just want to kind of go through a bit of a recap of what happened and how it’s different than Las Vegas. What’d you guys notice at HR Tech today?

Bill Boorman:           Well I think the first thing for me, when we’re talking about differences, is actually, about 80% of the vendors are the same. So on that scale, in terms of what that tells me, is…

Bill Boorman:           That increasingly even the smaller players, you’d expect it of your Oracles and Cornerstones and so on, even your smaller players are playing a global game rather than a domesticated game.

David Smooke:      Like global workforce trends. Maybe we could graph the overlap in HR Tech vendors versus, I don’t know, something with international workforce.

David Smooke:        (laughs) Compare the vendors to the international workforce.

Bill Boorman:           Yeah, I also think that has a relevance. You know I work with investors, and investors are very much looking at the moment for global footprints, something more than domestic, something bigger than America. America, the World Series, it’s the only country that has a world series with one nation. So I think people are looking a bit bigger than that and saying, certainly Europe. Probably half the speakers are about the same, so message, there’s two things that stand out for me that people are for the most part getting a bit better at that I like: One is UX and design, I think compared with last year, the products designs look better, much more usable, better navigation…

David Smooke:        Isn’t that always going to be true though? Come back a year later, there’s new trends, new interface and you’re used to it because the other stuff is moving in the same direction…

Bill Boorman:           I think it’s new buzzword. But again, top three things. Actually, surprisingly, not a lot of fuss or talk about mobile.

Bill Boorman:           Well that may be true for Glassdoor, you know, maybe people are just lying around…

David Smooke:         Yeah, no, I’m not saying that it’s not real. Yeah, I don’t know, Glassdoor reviews, I guess some of them are small. Or their average length is probably not that long…

Bill Boorman:           The point with Glassdoor, this is something I asked Robert about, actually a previous SHRM Conference founder, which is what I was really interested is: whether people use Glassdoor as a shopping destination or a checkout destination? What I mean by that is, are people comparing one brand with another in the way I think they would like you to think they do, or are people only looking at it when they’re getting ready to actually apply. So is it a checkout site? And the answer I got back from that is they use it for two things: one is salary, and the other one is that they only check one company. So I think if you’re only checking one company, and I have no idea if that data is the same…

David Smooke:         If that’s true that means the candidates that are on it are probably pretty far down the funnel…it’s like a background check on the company…

Bill Boorman:           You have to remember Glassdoor was founded in 2008… Trip Advisor, Expedia, as it was at the time. I think what we know from TripAdvisor is, we don’t really shop and compare things on TripAdvisor but we use it, you’ll find the hotel in a destination where you know there’ll be like [inaudible], but you’ll just use TripAdvisor to validate it before you actually press, yeah I’m going to spend some money and all, I’m going to book it.

Bill Boorman:           And I think the same pattern, which shouldn’t really surprise us, the same online behavior applies to jobs. People are saying…

Bill Boorman:           …I’ve seen it, I’ve found it, I’ve looked at it, let’s just double-check. Before I actually apply for this job let’s double-check. And that’s what I think Glassdoor is, so that’s why it wouldn’t surprise me. The point about mobile is, while I’m saying people are not making a big deal out if it, I think that’s because we’ve generally accepted that everything has to be built for mobile. It’s not a big deal. Now one of the interesting things that a couple of the tech startups said to me is the difference they’ve seen in that they were building mobile first, and realized they were still leaving behind the majority of their desktop users.

Bill Boorman:           That gives you authentic Amsterdam when you nearly get run over by a bike.

Bill Boorman:           Yeah, I don’t know what Marc’s view would be on that. No, I think that was an interesting thing that actually, whereas last year we were all talking about mobile, I saw a number of vendors saying, “We’ve had to catch up the desktop experience because we haven’t really been concentrating on that for a period of time, because we’ve been focusing on mobile.” And that maybe says to you well, and we still have a lot of desktop users.

Bill Boorman:           We could be killed in our impatience to report information.

Marc Mapes:             No, definitely less conversations about mobile and I didn’t hear anybody actually talk about it all…

Marc Mapes:             Yeah, it’s not as big of a deal as everyone kind of alluded to last year. It’s changed a lot, so it’s no focus on that. It’s just a given, right, especially in the startups, a lot of them and, not for us because it doesn’t fit our product, but they’re starting with mobile first and then going to desktop. And like you said, they’re improving the desktop version of things to make it more incorporated…

Bill Boorman:           What I think they’ve learned, certainly what the startups were saying in the DisruptHR area, is that you have to give equal attention to the desktop experience, and the desktop experience is going to be different visually, navigation wise, and everything else. And the fact that maybe they’ve sacrificed that in the desperate quest to be mobile, and they’ve suddenly gone, actually and interesting they said, we discovered we have to have a good desktop experience to sell the product. Because the buyers are still desktop.

David Smooke:         Yeah, and that’s it. The startups are more in a community where everyone else is a bit more ahead technology wise, so all their friends and all their peers are very focused on mobile and then you need to think about the buyer that is, you know, not using the mobile phone as much.

Bill Boorman:           Yeah. I also think we’re beginning to see real data products. We’re going to see some very good analytic suites and analytic products, from people surprisingly like BroadBean. I think William Tincup made the comment that he was really surprised when looking for innovation he always look to startups, but he’s seen really good innovation from a company like ADP.

Bill Boorman:           And that sometimes we’ve seen some good innovation in Oracle, doing some cool stuff. And that maybe…

David Smooke:         Oracle, my innovative Oracle moment of the conference was that they sponsored the Wi-Fi so you had to type their name in to get the Wi-Fi. The only time I typed in Oracle in the last, however many months…

Bill Boorman:           Yeah, but whatever it is I think that’s a valid point that you know, maybe the giants are beginning to go, “We need to get a bit more inventive and sharpen up a bit.”

David Smooke:         Yeah, and a lot them are broken off like the equity firms and the small elite teams. Yeah. And it’s good to see. All right, is this pub any good?