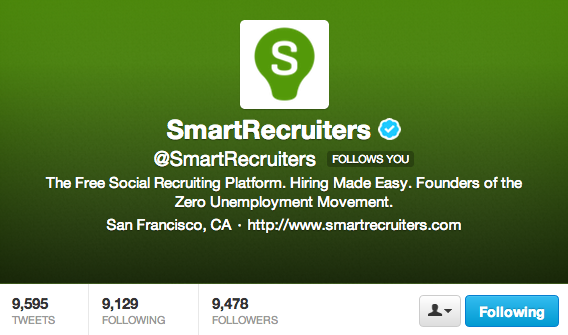 In 2012, SmartRecruiters more than doubled its customer base. We did so, first and foremost, by having an awesome product, but also through distributing our product with a purpose. People should use SmartRecruiters free hiring platform because it will make the recruiting for their business more efficient. We firmly believe that improving the practices and economics of hiring will have a great impact on the entire economy. Follow the growth of  SmartRecruiters through the top 101 tweets about this SaaS startup in 2012.

Who to follow in 2012? @jerometernynck. Because he on a mission to end unemployment, & owns the best line I heard in ’11. There IS no ‘mium

The Best of Social Media Recruiting 2011 | SmartRecruiting j.mp/zk5tGa <–a goldmine of great posts on #socialrecruiting!

@smartrecruiters is getting my ads visibility on #Indeed and #SimplyHired…BOMB DIGGITY!

Have I told you how much I LOVE @smartrecruiters ??Well I do, FREE and easy to manage postings/applicants and hiring mgrs!

Great to hear about the $5M Series A financing! Love @smartrecruiters! @jerometernynck

@smartrecruiters Wow now that is fast service. Already rec’d a call and sorted it all out. Thanks. You guys rock!

@jerometernynck So glad I pulled into @drivethruhr today. @smartrecruiters may be the answer to many clients’ prayers.

Got this earlier: “Wait, so w/ @smartrecruiters u can post jobs, find candidates AND manage everything until you hire?” > Yes, that’s right!

amazed by rich UI and functionality of @smartrecruiters ….helping my uncle’s implement for his business…thank you @jerometernynck

I dont get $ like @blogging4jobs but Ilove @smartrecruiters Free Recruiting Model Changes War For Talent j.mp/woI8KU

The amazing thing about this offer is that @jerometernynck means it prweb.com/releases/2012/…

Jerome Ternynck – the master of seizing the opportunity and thinking differently prweb.com/releases/2012/…

smartrecruiters.com/static/ A simple way for businesses to integrate #social media in their recruitment process.

@smartrecruiters loving your articles and tweets! closely following u!

RT @madeinargentina @smartrecruiters loving your articles and tweets! closely following u! <= that makes 2 of us!

Just started using #SmartRecruiters It’s unbelievably easy & efficient. Recommend it to every recruiter out there.

Gr8 post, love the MLK footage! “@smartrecruiters: “I believe that every person is born with talent” ow.ly/9ewVv #recruiting”

@nikhristov @smartrecruiters great customer service! Thank you very much for bringing across the EASY in free and easy!

Why Free is the New King of Recruitment – SmartRecruiters and Weebly | Attack Defend Disrupt goo.gl/95Y7i

I follow @smartrecruiters for their excellent thought leadership! #ff

Our site has been redesigned! Using @smartrecruiters and like the service quite a bit! braingainrecruiting.com

Super initiative! Make it happen >> Time to Put America Back to Work. Create a Job. Be a Hero. smartrecruiters.com/gotjobs/ #GotJobs

Meet SmartRecruiters, a company that is trying to end unemployment tnw.to/1E7OM by @alex

Take Credit For The Jobs You Create With SmartRecruiters’ “Got Jobs?” Campaign tcrn.ch/Ji5Kem by @anthonyha

Love this idea –> Take Credit For The Jobs You Create With SmartRecruiters’ “Got Jobs?” Campaign pulse.me/s/8sGdv via @techcrunch

Free, love it! “Add a Careers tab to your facebook page and start turning fans into hires” | facebook.com/CareersTabBySm… | @smartrecruiters

Met the guys at @smartrecruiters last night – their free hiring SW is modern, social and free. #startups should add this to their toolbox.

@smartrecruiters Love that u have a free ats. I recommended SR at an event 2 months ago to some small businesses. Hope they checked it out.

Hired our 1st Intern for Summer 2012 thanks to @smartrecruiters! Check it out! smartrecruiters.com Keep up the good work, @jerometernynck!

@smartrecruiters Thanks for the follow, it’s good to create visibility with you. Your mission inspires me.

Definetly @smartrecruiters makes my life so much easier! Love it!

Just created a careers tab on fb via @smartrecruiters and love it! Looks so professional and slick 😉 Great app #fancy

Social profiles or traditional resumes? Here is @smartrecruiters CEO giving his take on it. ow.ly/cdQ8x

Just updated one of our openings and really like the new @smartrecruiters job posting interface. Very slick.

#FF to @davidsmooke & @smartrecruiters. loved the #smartup and love what you are doing. #followfriday

This Labor Day, Give a minute to helping the un and underemployed find satisfying work goo.gl/h4m8k @smartrecruiters#GiveLabor Day

Volunteer for Give Labor Day – Love this idea – I am in!#GiveLabor smartrecruiters.com/static/blog/vo…

3 Ways to Help Get America Back to Work for ‘Give’ Labor Day bit.ly/PShDLv via @blogging4jobs <—Great idea! I’m in! #givelabor

Such a great cause. #GiveLabor RT @blogging4jobs 3 Ways to Help Get America Back to Work by @davidsmooke bit.ly/NFdkkO

Everything about #GiveLabor is right on!

Digging this #GiveLabor trend. Help end unemployment by helping those who don’t have labor to celebrate find a job

Looking for a helpful hand in the job search? Hit me up. I’m volunteering my time today to get America back to work. #givelabor #jobs

I really like it when we get a spontaneous Praise about @smartrecruiters. Thank you. getsatisfaction.com/smartrecruiter…

@smartrecruiters Love the attitude you guys are giving to the job search. It empowers people.Great positive vibe.

Why Jobs Remain Unfilled Even Though Unemployment is High [INFOGRAPHIC] – on.mash.to/O87JDN

Hired our first recruit via @smartrecruiters – really impressed with the tool.

CEO’s and unemployed- Get on board! SmartRecruiters to Sail for Jobs During America’s Cup smartrecruiters.com/news/smartrecr…

@smartrecruiters Thank you for simplifying our recruiting process!

I just used@smartrecruiters, to apply for a job…took 3 minutes. Y cant evrythng n life b this easy?!

@smartrecruiters I love your site. It makes the process so much easier, esp when trying to fill multiple vacancies at once. Thanks!

When you post a job via @smartrecruiters, the system suggests where to post ur job based on amazing predictive analysis #hrtecheurope

@socialtalent @smartrecruiters The interface looks fantastic, definitely checking this out, a novice could navigate this #hrtecheurope

Hey @smartrecruiters, you rock my Casbah! Thanks for helping us find SUPER rad people. BFFs!

4 Tools to Take the Stress out of #Recruitment. bit.ly/RSzq7h #HR_Software

@smartrecruiters Thanks for following!Have been using your site and are finding great candidates!

.@smartrecruiters Thanks for sharing your awesome space with us! Loved meeting your oh-so-smart team! #AptlyNamed #socialhrcamp

Way impressed with all the people I met yesterday from @smartrecruiters. These guys love their company and live their brand. #inspired

V special thanks to @jerometernynck for being such a great mentor. I’ve learned a lot from you. Simplicity and focus! You are my #SteveJobs

It does not disappoint in practice either! ‘I think I found a new love @smartrecruiters software looks nice’ via @w_goddard. #smart

@jerometernynck Many thx for great discussion last night. I think you’re on to something big and look forward to more news from the front.