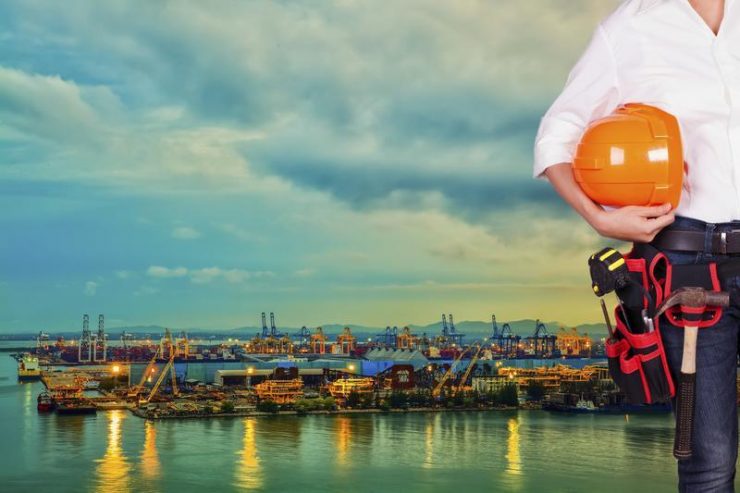 The Demand for Engineers

Not pre-med. Not business. Not computer science. The most popular college major choice for high school seniors surveyed by CareerBuilder—the majority of whom already have a career in mind—is engineering.

We can debate how many of these students will stick with engineering when they get their first homework assignments in college. But let’s assume most of them don’t move to less rigorous majors. Which engineering field should they choose? What are the most in-demand engineering jobs in the U.S. based on job growth, hires, and job posting activity? And which ones have the oldest workforces that will need to be replaced sometime in the next five to 10 years?

To answer these questions, we looked at labor market data and job postings analytics from EMSI for all 18 engineering occupations classified by the Bureau of Labor Statistics and all eight engineering technicians occupations (which are primarily middle-skill positions). Both categories, despite the difference in educational requirements and median pay, are adding a bunch of jobs post-recession and are key STEM occupation groups. But they tell a different story when comparing job postings from employers and hiring that’s taken place.

The most-concentrated metropolitan area for engineers (among the 125 largest MSAs) is Huntsville, Alabama, which is home to a NASA flight center and other aerospace and military establishments. Huntsville has 5.1 times more engineers per capita than the national average. Next is San Jose (3.5 times the national average), Palm-Bay-Melbourne-Titusville, Florida (2.9), and Detroit (2.75). In general, the South (Huntsville; Augusta, Georgia; Greenville, South Carolina) and the Rust Belt (Detroit, Dayton, etc.) are the densest areas for engineers.

Occupations with older workforces are potential targets for labor shortages. Not all workers 65 and above will retire at the same time, so the doom-and-gloom scenarios that get tossed around likely won’t become reality. Yet if the demand for workers continues and if a good-sized segment of that workforce is poised to retire, skills gaps are likely to become a real issue—especially at senior or management-level positions that are hard to recruit for. We’ve documented this trend in the skilled trades, and it’s just as relevant in engineering.

Two of the fastest-growing engineering fields also staff two of the largest proportions of older workers: industrial engineers and petroleum engineers. In both, 25% of currently employed workers are 55 years or older. Industrial engineers are vital to many manufacturing firms that struggle to find the right technically oriented talent, so the aging workforce is a threat. Petroleum engineering, meanwhile, has had a noticeable undersupply of graduates coming into the marketplace in the last few years, with just 1,600 completions in 2013 compared to EMSI’s yearly job openings estimate of 3,500. 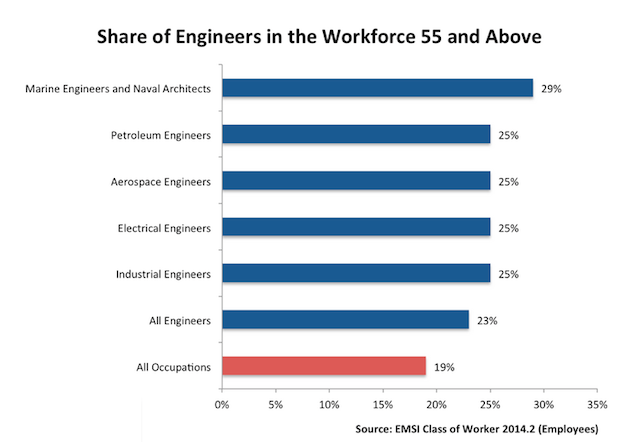 The engineering occupation with the oldest workforce is also one of the smallest in terms of jobs: marine engineers and naval architects. Only 8,000 of these jobs are in the U.S., but 29% are 55 years or older. The youngest occupations, on the other side, are computer hardware engineers and agricultural engineers; just 12% of the current workforce in each is 55 or over.

We’ve given the lay of the land for engineers with traditional labor market data, an essential step for any workforce analysis. But EMSI’s new job posting analytics gives an additional context and perspective into the demand and hiring activity for engineers.

For instance, one thing we can quickly see is that de-duplicated online job postings exceeded average hiring on a monthly basis for all engineers from January 2012 to July 2014. This is an indication, perhaps, that the pool of skilled talent nationally isn’t keeping up with employer demand. The best example of this is perhaps industrial engineers, an occupation with three times more unique monthly postings (24,740) than average monthly hires (7,737) since the start of 2012. These excess postings could represent real vacancies.

Conversely, hiring is outpacing posting for civil engineers (13,657 monthly hires to 6,025 postings), as well as engineers, all other and nuclear engineers. These and other engineering occupations could be under-represented in online job postings, meaning that employers find alternative ways to recruit for these positions.

For colleges and workforce professionals who want to get the most clarity on skills gaps and employer demand, we recommend exploring regional data and engaging local employers. Read more about that in our analysis for JP Morgan Chase’s New Skills at Work initiative.

The growth of engineering technicians has been strongest in Detroit (27% since 2010), but Houston, Seattle, and Portland have also seen double-digit employment growth. Most of the Rust Belt, as the green on the map below indicates, is experiencing job growth after severe layoffs during the recession.

Overall, engineering technicians have a younger workforce than traditional engineers. While about a third of engineering techs are 45-54, there are fewer 55-and-older workers in these mid-skill fields (21% compared to 23% for engineers). For context, 19% of all traditional salaried employees in the U.S. are 55-plus.

In contrast to engineers, there have been more hires than postings for engineering technicians. Just about twice as many, in fact, from January 2012 to July 2014. This makes sense given that employers are less likely to scour the internet for available technicians than they are for highly skilled engineers.

The number of employed civil engineering techs in the workforce dropped slightly from 2010 to 2014 (from 72,500 to 71,700). But employers have been more active in posting for these jobs (unique postings were up 50% from January 2012 to July 2014), while posting intensity—a ratio of total postings to de-duplicated postings—is lower (3-to-1) than all engineering technician occupations (4-to-1).

We also examined job posting analytics for Detroit, since it’s such a huge growth area for engineering technicians. Hires eclipsed job postings by a 3-to-1 ratio from January 2012 to July 2014. The majority of top companies posting for technician positions in Detroit are staffing companies—further evidence of the link between manufacturing and temp employment that we wrote about earlier this year.

This article was written by (Director of marketing and PR at EMSI) Joshua Wright from Forbes and was legally licensed through the NewsCred publisher network. Learn more about SmartRecruiters, your workspace to find and hire great people.