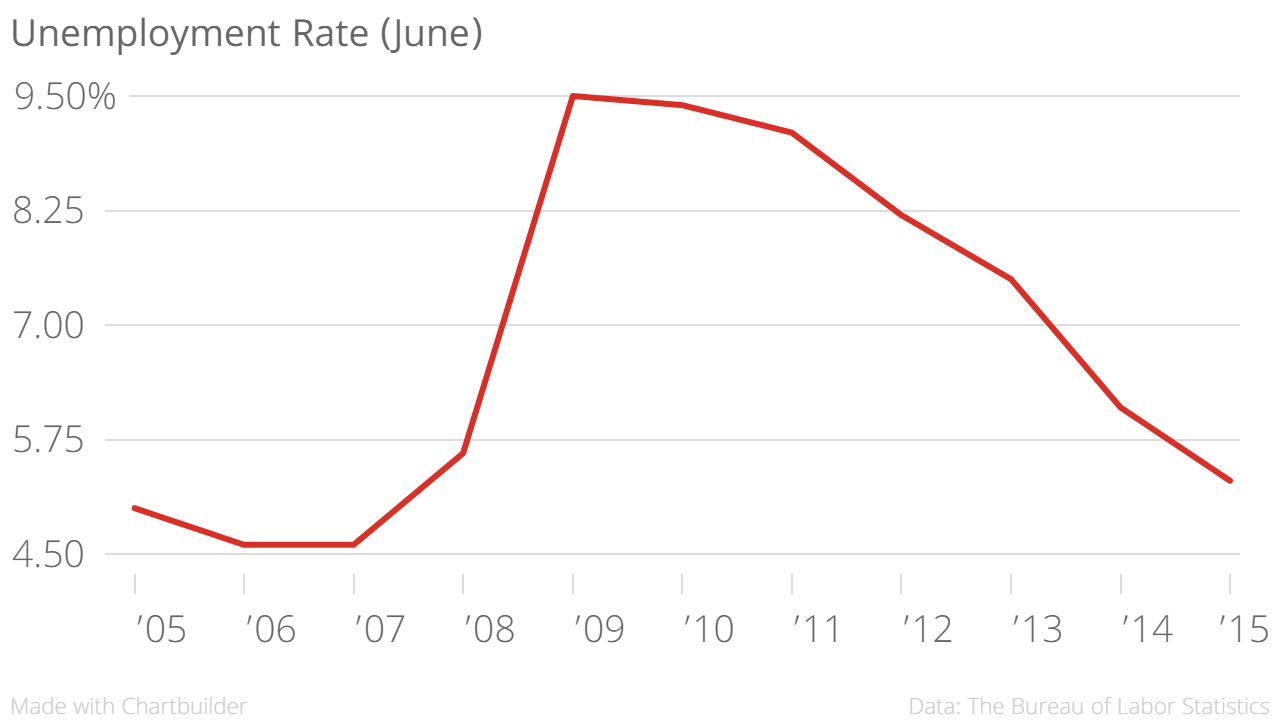 Heading into the holiday weekend Americans got news that fewer of them are working. The headline numbers in the jobs report out from the Bureau of Labor Statistics Thursday morning were solid but the underlying data was less worthy of celebration.

Heading into the holiday weekend Americans got news that fewer of them are working. The headline numbers in the jobs report out from the Bureau of Labor Statistics Thursday morning were solid but the underlying data was less worthy of  celebration.

Employers added 223,000 jobs in June. While economists were forecasting an addition of around 230,000 jobs the figure does continue the medium-term trend of above 200,000 average monthly growth.

The revisions, however, reflect a weaker rebound from winter weather related weakness than previously thought. The payroll count for April was revised lower to plus 187,000 from the latest reading of 221,000. This is the second downward revision to the April reading which initially came in at 223,000. May’s figure was also revised down to plus 254,000 from plus 280,000 jobs. Net total employment gains in April and May were therefore 60,000 lower than BLS previously reported.

The unemployment rate, which is drawn from a different survey, came in at 5.3%. Down from 5.5% in May this is the lowest rate since April 2008 but reflects a shrinking labor force. In other words, the rate is down for what economist consider the wrong reason.

“Looking below the surface, this was not a great jobs report,” wrote Joseph Lake, global economist for The Economist Intelligence Unit, in a note on the results. In a phone call Dan North, chief economist at trade credit insurance provider Euler Hermes North America, echoed this sentiment calling the report “a step backwards.”

His biggest concern? The labor force participation rate hit its lowest level since 1977 after declining a “fairly dramatic” 0.3% to 62.6%. This rate had remained in a narrow 62.7% to 62.9% range since April 2014. “The labor force shrunk,” said North, with both the number of employed and the number of unemployed going down.

Currently 8.6 million Americans are unemployed. In June there were 653,000 discouraged workers — i.e. people not currently looking for work because they don’t believe jobs are available for them and therefore are not considered unemployed. That’s 90,000 more than last month.

A long standing concern has also been the large number of people who are working part-time not by choice but because they had no better option. The U-6 rate, which measures under-employment, came in at 10.5% in June versus 10.8% in May and down from 11% a year earlier. The employment-population ratio was 59.3% down from 59.4%.

Hourly wages, also left behind as the labor market has broadly  improved in the last two years, were unchanged from last month at $24.95. The 12-month wage growth rate therefore moved lower to 2% after an 8 cent gain in May bumped annual growth to 2.3%. Michael Arone, a chief investment strategist for State Street Global Advisors, sees the stagnation as temporary pause. Announcements from large employers like Wal-Mart Stores, McDonald’s and Target as well as minimum wage legislation from 12 states are leading him to think wages have bottomed and will show improvement in the third and fourth quarters.

For Tara Sinclair, chief economist at job site Indeed, the issues of a shrinking labor force and stagnant wages are impossible to seperate. Employers have indicated they are “keen to hire.” The eagerness is showing up in government data and the growing number of job openings on Indeed.com. Where is it not appearing? Wages. They simply aren’t high enough to entice workers, she says.

“The silver lining in this report,” says Sinclair, “is that if we are still able to create jobs at this magnitude without raising wages, there is still room to grow. Wage growth should be around the corner.”

Immediately following the release stock futures moved further into positive territory. The S&P 500, Dow Jones Industrial Average and Nasdaq Composite each opened in the green though the latter tuned negative in early trading. The yield on the ten year Treasury opened up a 2.46% before turning negative.

The initial bump was likely due to the hope that a largely lackluster report would convince the Federal Reserve to keep interest rates lower for longer. The single report, nevertheless, does not appear to have changed many opinions. Arone still expects the Fed to act in September. North still see December as more likely.

Wednesday, payroll giant ADP said that private employers added 237,000 jobs last month with nearly half the gains coming from small businesses. Mark Zandi, chief economist of Moody’s Analytics (which works with ADP on the report), said at the time, “The U.S. job machine remains in high gear. The current robust pace of job growth is double that needed to absorb the growth in the working age population. The only blemish in the job market is the loss of jobs in the energy sector. Most encouraging is the healthy rate of job growth among the nation’s smallest companies.”

BLS — a division of the Department of Labor — will report July jobs numbers on Friday, August 7 at 8:30 a.m.

This article was written by Samantha Sharf from Forbes and was legally licensed through the NewsCred publisher network. SmartRecruiters is the hiring success platform to find and hire great people.