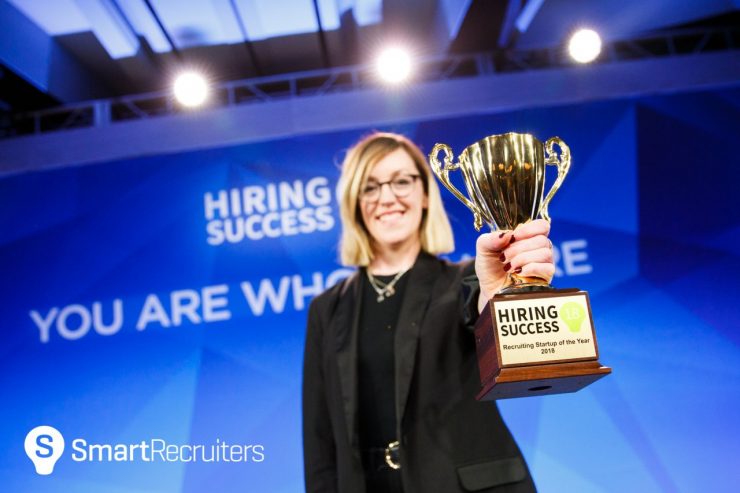 From 50 initial competitors, five of the most innovative recruiting startups in the world were chosen to pitch it out on the main stage of Hiring Success. Watch now!

The first annual Recruiting Startup of the Year competition from Smartrecruiters saw fledgling recruiting companies from Germany to Washington State battle it out on social media to see who could leverage their networks for the most votes, to be one of five finalists to make their pitch to the 1,000+ TA leaders and executives at Hiring Success 18.

The campaigning was fierce, but from 50 initial contestants, JobPal, Recruitsy, Talent Savant, and Recruiterly distinguished themselves as especially promising in their field and flew to San Francisco to make their case for first place at the third annual #hire18.

Before they took the stage, the startups had to meet their “Shark Tank”, aka the six judges who would determine the winner: Matt Gallo, partner at Insight Ventures; Ted Wilson, partner at Silicon Valley Bank; Tejas Maniar, Partner at Mayfield; Jeff Diana, Investor and high-growth consultant; and Rebecca Carr, Smartrecruiters’ VP of product .

The Prize was $10,000 in media spend from HR.com, an article by Talent Tech Labs’ executive Director Jonathan Kestenbaum, and a gold level sponsorship to next year’s Hiring Success Conference.

First up, JobPal. A builder of recruiting chatbots with a custom language processor built especially for recruiting. They leverage messaging applications like Whatsapp and Facebook Messenger to make the candidate experience smoother and save recruiters time.

Judge Jeff Diana said he was impressed by the 15 percent conversion rate these bots get on average, but cautioned against losing focus. “They scared me a little when they talked about moving into the broader employee experience. My advice is to go crush the recruiting market first.”

Up next we had Recruitsy. It’s Yelp meets recruiting: a public rating system of recruiters and recruitment agencies. Candidates can see reviews for individual recruiters as well as agencies, and agencies can use the platform to build their brand, target problem areas, and reach out to candidates.

Of Recruitsy, Judge Matt Gallo was convinced of the need, his only question was how they would gain critical mass?  “In these reviewer marketplaces, it tends to be a winner take all or winner take most. How will you grow quickly enough to put out competitors?”

Following these recruiter focused tools we take a look at Honeypot.io, the job board for developers and other computer engineers that turns the application process upside down by making the employers apply to candidates who are vetted by the site. Established in October 2016, this platform already has over 50,000 candidates (all of which are only on the site if they are actively seeking work) with 1,000 more signup weekly.

Honeypot.io presented an interesting conundrum to Judge Ted Wilson. “I think the approach of candidate first is unique and clearly developers are willing to sign up,” said Wilson, “but usually we talk about passive candidates as the best candidates. How do we change the narrative and convince employers that the candidates who are raising their hands for jobs are really the ones to look at?”

Recruiterly is a brand-building and social network tool for recruiters and recruiting agencies, so employers come to them. The goal is to change the perception of the recruiting industry and allow recruiters to showcase their skills.

Judge Tejas Maniar was on board for the product but he wanted to see more passion. “Recruiterly established the need superbly but I want to see a double-click on the enthusiasm and excitement.”

To wrap up we had a presentation from Talent Savant, a mission-based recruiting agency that answers staffing needs without the hard sell, outrageous prices, or irrelevant resumes. The goal is simple, get people jobs and get employers the workers they need – it’s called ‘pro-human hiring!’

Talent Savant was the only no-tech startup pitching for Recruiting Startup of the Year, but judge Rebecca Carr felt they held their own. “I think it’s great how this startup puts forth its personality,” she said. “Their brand of mission-driven recruiting gives them a unique flair and cuts through the noise.” 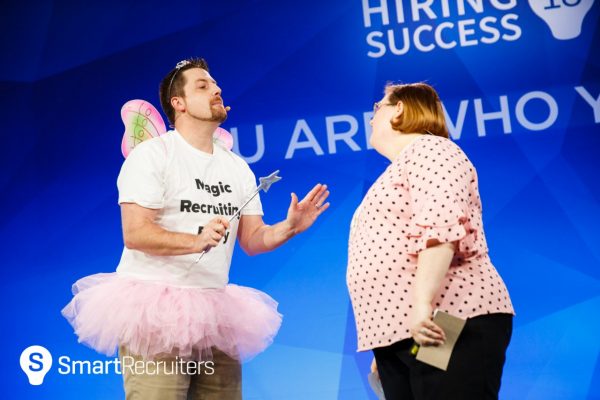 After the presentations, the judges deliberated live on stage. The startups were appraised on the criterion of vision, do they have a mission that people can get behind? –  influence, is their idea innovative enough to break through? – and presentation, can they make people believe in their company in just five minutes?

In the end, Honeypot was awarded first place! The judges were impressed by how this job board has been able to turn candidates into active players in the employment search and want to see how the platform grows.

“In the world of startups,” says CEO and founder of SmartRecruiters, Jerome Ternynck in his closing remarks “there are no winners or losers, only hustlers working to change their world, creating and grabbing opportunities, embracing effort, and learning from every failure as well as every success – that’s really what it’s all about.