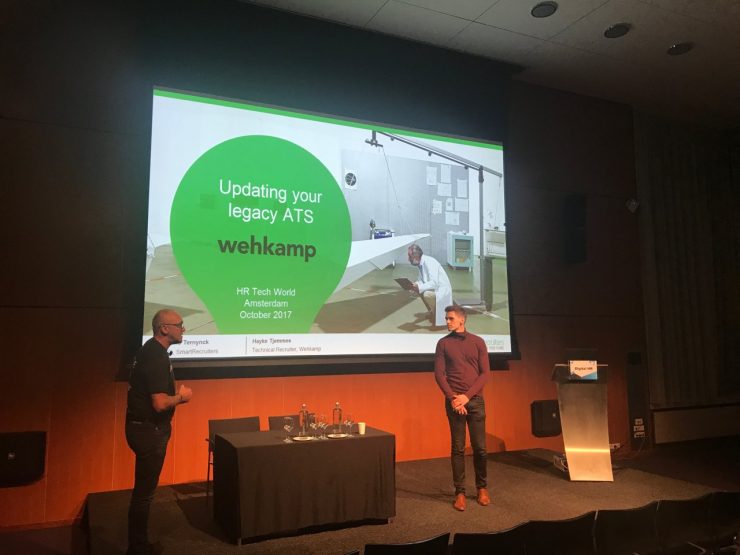 Technical Recruiter for Wehkamp, Hayke Tjemmes-Aalders connects candidates’ talents to their ambitions. With 10 years of technology and eCommerce experience behind him including – automation testing and coaching – Hayke knows how to harness technology to ultimately make the recruiting process more human.

The second day of Hr Tech World Amsterdam marks my first week with SmartRecruiters. Today my mission is to get to know our product from the customer side. How are real customers interacting with our software?

This is how I find myself taking a seat in a cozy conference room tucked away from the hustle of the expo floor. I’ve come to hear from Hayke Tjemmes a Technical Recruiter from Wehkamp on his company’s experience transitioning to SmartRecruiters’ Talent Acquisition Suit. Hayke has 10 years of experience building teams and integrating technology with recruiting so I figure if anyone can help me understand how technology makes a difference in hiring, it’s him.

Hayke shares the stage with Jerome Ternynck our Founder and CEO and the two chat and smile warmly as if they were grabbing coffee – far from the nervous wreck, I would be speaking in front of all these seasoned professionals filling the room. The pair’s attention naturally shifts toward the audience as everyone finds a place and it feels like we are naturally becoming a part of a conversation that was already going on.

As an American, I’m not familiar with Wehkamp but a quick Google reveals it’s a pretty big deal. It’s the second largest eCommerce in the Netherlands – which is impressive in itself –  but what really struck me was that this company was founded in 1954. That’s prehistoric for an eCommerce business!

Wehkamp began, back in the day, as a mail-order catalogue for mattresses. ‘Buy a mattress get a pillow free!’ was their slogan. They changed over to a telephone catalogue in 1984, before becoming the first in the Netherlands to start digitizing their marketplace in 1997 and became completely online by 2008.

Already I’m interested because so many companies have fallen by the wayside in the transition to eCommerce – unable to adapt to the changing marketplace. If Wehkamp was able to survive the rapid cycles of innovation that could have made them obsolete they are clearly a company to watch. They’re clearly agile and able to adapt – and if they picked SmartRecruiters to grow their company, I want to know why.

Hayke describes the terrain his company is navigating when trying to acquire talent.

“We are a big team. With 900 employees currently, at any given time we are looking at 60 or so positions. We need diverse talent overall to fill these positions and among this pool of diverse talent we need people with specialized skillsets… it’s a challenge”

The audience is a chorus of knowing head nods as – I think he’s hit on a common frustration among recruiters.

Hyke continues to set the scene.

“Our company, like most, leans on HR for hiring and though hiring is one HR’s functions we also needed to do more to engage other departments in vetting candidates. I don’t always know what will make a candidate be a great Scrum Master let’s say, but a Software Development Manager would.This holds true for many of the jobs we are filling; like Merchandise Planner Womenswear, or Android Developer”

It makes sense to me that Hayke and his team needs to engage everyone. Designers should hire designers, product managers know best what they need out of a product manager This made me wonder what was keeping current employees from engaging in the hiring process? Afterall, it’s best for them to have the best fit on their teams so what is stopping them?

What was getting in the way, according to Hayke, was the technology.

At this point Jerome can’t help but shake his head and add:

“ATSs are just that, applicant tracking systems – they aren’t a solution for hiring success. I see companies every day working around the technology they are paying for and it doesn’t have to be that way. Technology should support the process not get in the way!”

Chuckles of agreement ring through the room and Hayke picks up the thought:

“We were struggling with low adoption of our hiring system, it’s hard to get the people you need to be involved on board if the technology is clunky or the system isn’t intuitive”

The technology they had wasn’t right. They were making the best of what they had but Wehkamp is a company that looks to the future for the challenges and opportunities on the horizon and so even if what they had could work for now it wasn’t going to work for what they envisioned for the future.

Here’s what Hayke had in mind for the future of his company:

Hayke especially emphasized GDPR compliance which is a set of data privacy laws coming into effect in less than a year. (If you haven’t heard about this get more info here)

“GDPR compliance is just around the corner and many companies aren’t even thinking about it. These laws are going to severely set back businesses who find themselves unprepared and I wouldn’t feel comfortable teaming up with a brand who doesn’t have GDPR in mind. That’s not a company that’s looking towards the future”

When it came to selecting a Talent Acquisition Suite Hayke already had his requirements in mind so the process of selecting a platform only took 12 days.

At the beginning of September 2017 Hayke lead his team in the revolution from tracking applicants to purposeful, data-driven, team-powered hiring!

The whole process of implementation took only a month! That’s content configuration, training, so integration, interview calendar sync, and many other bits and pieces all coming together in time for the first October leaves to fall!

I’m new to this world so I’m not sure how impressive this implementation really is. Is it really that big of a deal to update a legacy ATS? So I ask around and it turns out it’s something people are really wary of. They’re still experiencing trauma from installing their original ATS 10 or 15 years ago.

Jerome speaks to this fear of updating:

“People are afraid to switch over because the last time they did it – maybe 10 years ago, maybe 15 years ago it was a long arduous process that really stopped everything. Now we’ve come a long way and, as you can see from the Wehkamp experience, it’s a lot easier now shouldn’t be scary – it should be exciting”

Hayke smiles in agreement and adds:

“The Implementation Lead really helped as well. We had an assigned implementation partner from SmartRecruiters who took us through the whole process to our go-live so we were never in the dark about what would happen next”

My impression was that it was like economy and first class when you’re flying. First-class you don’t get upcharged, the stewardess brings you a blanket before you even ask and you sleep easier. Technically you get to the same destination either way, but who makes the most out of their vacation: the jetlagged economy passenger or the bright eyed and bushy tailed first-class guest?

In the 3ish weeks since Wehkamp switched over their already seeing some positive effects on their hiring culture and their company as a whole.

Hayke laughs and raises his shoulders:

“What else is there to say? It’s such a relief to finally have a system that’s working and we don’t have to think about”

And that’s my main takeaway as I file out of the conference room leaving Hayke and Jerome to catch up further as the others leave.  The only thing you should have to say about your Talent Aquisition Suite – is nothing! It should be so integrated into everything you do and work so seamlessly that you forget it’s there.

Wehkamp has undergone 3 major revolutions as a business: the transformation from mail-order catalogue starting in 1954 to telephone catalogue in 1984, the adoption of e-commerce in 1997, and the switch to 100% online in 2008 but it’s now experiencing a 4th. Wehkamp went from ATS to TAS, from tracking applicants to acquiring talent, from hiring struggle to hiring success all lead by Hayke and their recruiting team. And as a Smartian, even as a brand new one, I’m excited about that!