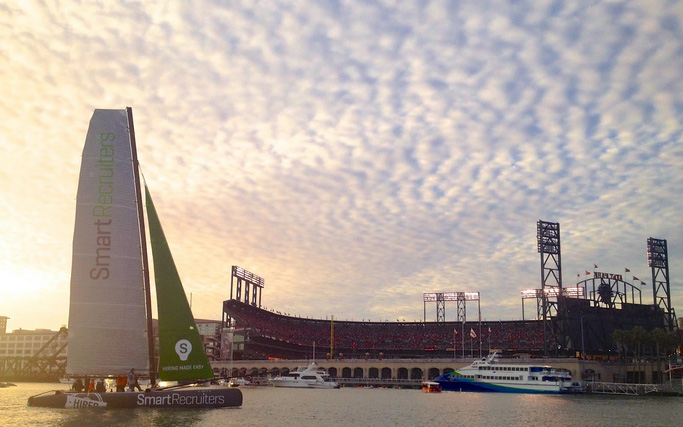 Working to Live: Aboard the SmartRecruiters X40 at the World Series

“No company, small or large, can win over the long run without energized employees who believe in the mission and understand how to achieve it.” – Jack Welch, CEO of General Electric from 1981-2001.

Great business leaders understand the impact a company’s culture can have on the success or failure of an organization. Few employers truly have the ability to steer the company’s culture in the right direction. Even fewer ask their employees to help shape the culture on their own. I believe that the best companies find a way to blur the lines between living to work and working to live. Following a recent SmartRecruiters company outing, I felt compelled to share my experience and describe what these types of moments do for companies.

SmartRecruiters created an opportunity for their team to enjoy a boat trip in San Francisco Bay and McCovey Cove and celebrate the SF Giants in the 2014 World Series. Without hesitation, I signed up to pilot the safety boat. After meeting the skipper at the marina, and attempting to help prepare for the trip, I felt a little overwhelmed, being an amateur boatsman at best. Nevertheless, like several of my coworkers, I was ready for the challenge. I had my thoughts focused on experiencing the electricity of McCovey Cove during a San Francisco World Series game as a strong motivator.

This was not just any boat ride. The SmartRecruiters X40 was extremely smooth, dangerously powerful, and exceptionally agile as we performed several sail-bys. In the middle of a turn, we slowed for a moment, the wind died down, and two fighter jets flew overhead at the end of the National Anthem. The SmartRecruiters team looked at each other with delight and joined in as AT&T Park erupted into cheers. At that moment, I felt closer to my coworkers than I ever have in the office, or at a planned company lunch, or at a conference. I looked up as the sun started to set and gleamed on the main sails and the waving SF Giants flags. Nothing but smiles on every one of my coworkers’ faces. My immediate thought: THIS is a group of energized employees who probably could and would run through walls to sustain this feeling of camaraderie.

We took another step forward that night into shaping the culture of our company. A mold that is never perfected but only created in the moment – and very much in tune with how the San Francisco Giants baseball team attacks the month of October:

And most importantly, we created real value that night for our company as well. Our employees were diligently tweeting, posting to Instagram, and building brand awareness amongst their social networks and the trending SF Giants posts. The SmartRecruiters catamaran was picked up on national television and syndicated across multiple networks. And an industry expert attending the game emailed us to share that our exposure that night was worth $200K in free advertising. Every one of my coworkers that night was a part of that success.

Now, obviously not every company is fortunate to be led by a CEO & founder who is an avid sailor and just happens to own one of the fastest racing catamarans in San Francisco, with sails and hulls that display their company’s branding. However, every company has the ability to leverage their exceptional employees and offer them the helm to navigate the path to a company culture that not only works, but exceeds expectations.

After dropping my teammates, and now fellow sailors, back on land, it was time to navigate back around the bay to the marina. The fog was rolling in as temperatures dropped in the last half hour of twilight. The skipper yelled to me across the wind as I steered us back safely, “Blake! How we doing!?” And the only response that could describe my feelings: “I live for moments like this!!”

On this night, SmartRecruiters successfully blurred the lines between living to work and working to live.

Blake Owen (b.owen@smartrecruiters.com) is an ambitious Account Executive at SmartRecruiters. He’d be happy to give you a demo.